A BEAUTIFUL stranger who saw you on the train that one time still thinks about you constantly, they have confirmed.

Actress and fitness coach Charlotte Phelps – whose name you do not actually know – saw you on the 8.37 into London Bridge one dull, wet Wednesday morning and was so enraptured that she has thought of little else since.

Phelps, 24, said: “As soon as he got on the train, he had my attention with the way he kept nervously looking at me and gawping. Nobody has ever done that before. It was so sexy.

“I’m not usually attracted to people who have that desperate, sexually frustrated, nowhere-near-my-league vibe, but for some reason this time I fell instantly and intractably in love.

“Since then this unattractive mystery man has played on my mind constantly, so much so I’ve tried to writing poetry about him as an outlet. But I’ve really struggled to find rhymes for ‘poorly kept facial hair’ and ‘narrow shoulders’.”

Phelps has been forced to seek help from a cognitive therapist who specialises in dealing with extreme romantic infatuations.

Dr Donna Sheridan said: “I’ve sadly been unable to help. Once she started telling me about this person I instantly fell in love with them as well. A man with bad posture who stares at women on trains? How could she let him slip through her fingers?” 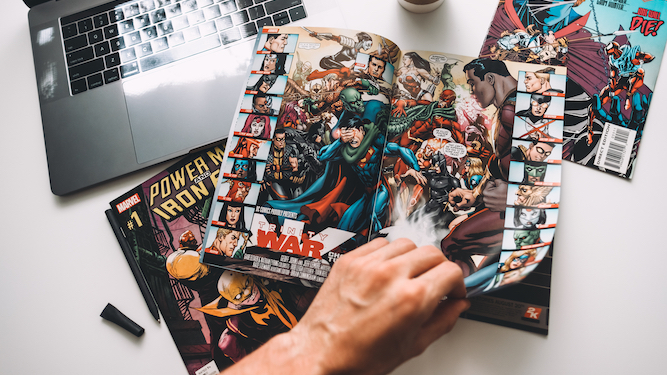 DATING a nerd? You could be exhibiting problematic behaviour like this without even knowing it.

Folding down corners instead of using bookmarks

What are you, a f**king animal? You could have enjoyed the most romantic date in history and ended it in the best way possible by reading your encyclopaedias in bed, but if you fold down the corner of a page to keep your place then expect to be thrown out. It’s not hard to memorise a page number if you’re caught short.

Calling the Doctor ‘Doctor Who’

The character is called the Doctor, the programme is called Doctor Who. Unless you’re referring to those films starring Peter Cushing. Or that time he was called Doctor Who in 1966’s The War Machines. And even then the Doctor’s real name is Theta Sigma. God, it’s like you haven’t wasted your life learning useless trivia.

Mixing up Marvel and DC

To you they’re just comic characters who dash around in capes and star in increasingly tedious movies. But to a nerdy partner they are bitterly opposed rivals with clear differences that set them apart. Although if you ever want to get dumped at least you’ve got an easy way out. Just say Batman is your favourite Marvel character.

Confusing them with geeks

Nerds and geeks are two completely different things, and mixing them up is a massive red flag. Geeks are a trendy appropriation of nerd culture without any of the social awkwardness, whereas nerds memorise the periodic table for fun and think pocket protectors are both practical and stylish. Oh how you wish you were dating a geek instead.

Being able to healthily express your emotions

Are you comfortable expressing how you feel both verbally and physically? If so, your nerdy partner will think about calling time on your relationship. That’s because the two of you are clearly mismatched, and even though opposites attract when it comes to magnets, the same sadly does not apply to humans. It’s one of the many ways we’re inferior to magnets.