ARE you a vile slob in the privacy of your own home? The answer is ‘yes’. Here are some horrible little habits that, if discovered by your other half, would make them go ballistic.

Trimming your pubes with the scissors

Is your lady bush or man hedge in desperate need of some ‘downstairs topiary’? Pop to the kitchen and get the only sharp scissors in the house. Yes, last night you were cutting chicken with them for the tikka masala, but they’re nothing if not versatile. You can always run them under the hot tap for 10 seconds to ‘disinfect’ them, if you don’t forget. You’re not a monster.

Wiping your bogies on the sofa

Life is too short to go and get a tissue every time you need to jettison some snot. Which makes secretly poking your bogies down the side of the sofa the only option. Yes, your three-seater from DFS has taken on a slightly green hue on the ‘crusty’ side where you sit. But your partner is too busy watching Better Call Saul to notice, or they’re doing it themselves.

Killing flies with a tea towel

If a fly dares to cross the threshold into your home, its days are numbered. You grab the nearest item you can – always a tea towel – and flail wildly until you finally splat it. There’s probably some squished fly juice and guts on it, but they’re only small so simply put the fly-goo-infused tea towel back on the rack. Luckily, it’s not your turn to do the washing up. Somehow it would be disgusting then.

A toothbrush is perfect to clean those hard-to-reach places. Like down the bog. All you have to do is remember which brush you used – the green one. The toothbrushes belonging to you and your partner are the red and blue ones. Or was it the blue and the green? Which was the turd scrubber again? Bollocks. Still, it can’t be the purple one because you brush the dog’s teeth with that.

We’ve all been there. Mid-poo you’re looking up for some loo roll and notice there’s not a scrap left. Rather than go through the embarrassment of asking your significant other, it’s easiest to hover over the bathroom sink and give your arse a good wash. Yes, your partner would be disgusted and angry if they found out. But not as angry as if they knew you also dried your bum on the hand towel. Then just hung it back up. 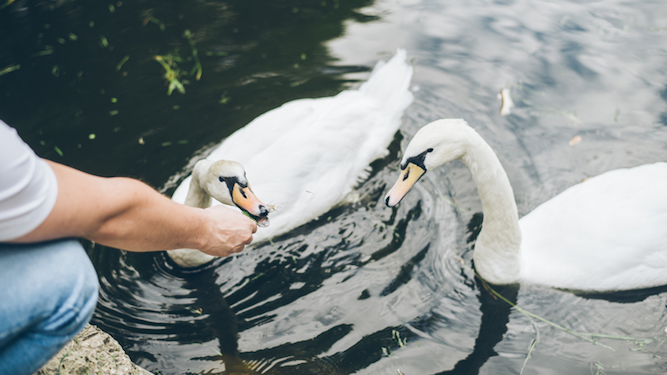 WONDERING what to do today if you do not care about the Queen? Enjoy the bank holiday like a normal person with these tips.

A petty act of defiance, yes, but you’ve got to do something to pass the time. Teasing Her Majesty’s beloved waterfowl can be as simple as pretending to throw them breadcrumbs, or as extreme as calling them ‘long-necked establishment pricks’. Don’t try to engage them in physical combat though, they can break your arm with their wing.

If you step outside you’ll be bombarded with reminders of the Jubilee festivities. To protect your sanity, remain indoors as much as possible and only pop out for essentials like a food shop or having a fag. If you must head into densely-populated areas, make sure you maintain two metres distance from anyone wearing a Union Jack.

This news is depressing enough even at the best of times. But for people who couldn’t give a toss about some crone who’s worn a crown for 70 years, today it’s especially awful. If that’s you, stick to channels which do not broadcast factual content like the news, such as ITV4, CBeebies, or Channel 5.

Stick on a film you’ve seen a million times

The pubs will be rammed with monarchy-loving dickheads, so you’re better off staying on your sofa, cracking open a can of Beck’s, and rewatching a film you already know off by heart. You’ll doze off before the halfway mark and end up spilling beer all over yourself, but that’s how you spend normal bank holidays anyway.

You’ve been avoiding putting up that shelf for years, but now the perfect time has come to sort out a minor home improvement. In comparison to watching a Red Arrows fly-by or listening to BBC royal correspondents drone on for hours, f**king up your living room wall with a nail gun sounds like a pleasant way to spend a lazy afternoon.