How to look sad and desperate by shagging someone much younger

AS many a married male actor in his 40s has proved, having an affair with a woman 20 years younger than you has its risks. Follow these tips to come out of it with no dignity whatsoever:

Make sure there’s no chance of it working

The age gap should be at least 20 years, but ideally more than 30 so there is no realistic chance of it being any more than a shameful fling. Everyone’s first thought should be ‘By the time she’s 40 his cock will look like a deflated party balloon.’

Have a large disparity in wealth/status

Less shameful if you’re an actor banging an actor. Really you want to go down the Rod Liddle, Paul Hollywood or Duncan Bannatyne road of banging a magazine assistant, PA or make-up artist. For maximum creepiness be their actual boss.

Do embarrassing public displays of affection

Be as physical as possible, for example mauling your young squeeze like a bear, or kissing with tongues outside a Starbucks. If people are instinctively crossing roads to put two lanes of heavy traffic between you and them, you’re on the right track.

End up in the tabloids

Only works if you’re famous, otherwise you’ll need a 60-year gap to get on the cover of That’s Life! The photos of your middle-aged gut and leathery tortoise neck will overshadow your next five acting roles.

Have daughters the same age

There’s nothing more humiliating for your family than your daughters being only a couple of years younger than this new bird. They’ll look at you over the Christmas turkey with fathomless disdain. And they’ll want to apologise to her.

Go crawling back to your partner

Claim that your marriage is stronger than ever, when everyone knows that divorce proceedings will begin in two months once your wife’s consulted with a team of slavering, vicious lawyers determined to force you into bankruptcy or playing the baddie in Jason Statham movies.

Six relationship red flags and how to ignore them 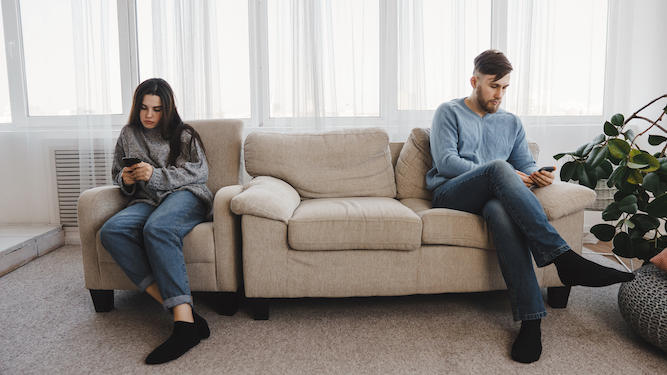 EVERY bad relationship has telltale signs that it’s toxic, unhealthy and should end immediately. Here’s how to brush them aside:

If your partner has suddenly taken up an evening hobby she comes home from late and flushed, take up more hobbies yourself! How better to deny her obvious infidelity than plunging yourself into crocheting, wood-carving or competitive dog-grooming?

Does your partner no longer pay attention to anything you say? Turn this into a plus by offloading years of resentment with zero scruples. They’re still the bad guy for ignoring you while you’re being open and honest about their arsehole friends and frankly dissatisfying lovemaking.

Tiny, underhand acts of unkindness, like finishing the milk leaving none for your tea, spending all night on the PS4 when you want to watch Bake-Off or sleeping with your sister are very bad signs. Paper over those cracks by having a baby! There’s nothing like a screaming infant to stop you sweating the small stuff.

They prefer the dog to you

Then start spending more time with the dog yourself. A meaningless competition for canine affection will focus your mind, piss off your partner and distract you from the desert of your sex life. It’s all about the little triumphs.

When your partner’s insulting you to your face, it could feel like the point of no return. But turn it into passionate two-way communication by unleashing your true feelings about their wardrobe choices, hygiene habits and tiny dick. Laying into each other in front of friends, colleagues and in-laws makes it even more thrilling.

Partner has shut down emotionally to the extent that they’re no longer even registering your existence? It doesn’t have to be over. Ignore them right back, no longer eating or even sharing a bed with them, and it could begin a new era of peace and serenity for you both.