FROM your fit maths teacher to your cute former boss, there are certain people it was never going to happen with. Join us on a nostalgic journey of sexual regret.

Having sex with a teacher is obviously illegal and leads to Bad Consequences. Nonetheless, here are the ones you fancied:

How did lovely Ms Stevenson come to be teaching in a comp in the North instead of earning millions on the Paris catwalks? However she was very nice and patiently taught you cosines.

The male equivalent of Ms Stevenson, Mr Galbraith was fancied by all the girls due to his good looks and occasional digressions into music he liked. He was only actually 24, but seemed incredibly grown-up and wise.

Cooler students than you

When you arrive at uni aged 18 there will inevitably be more mature and cooler students than you. Such as:

She was very upper-middle class and spent six months in Thailand doing interesting things like Buddhism and opium. Your teenage years were spent at shit parties drinking Skol. She’s now a highly paid investment banker so if you’d ever got it together you’d never have to work again.

Student politicos tend to be abject wankers, but the odd one is genuinely committed and decent. They also wore cool leather jackets. What this guy is up to now is anyone’s guess – he could be a spad or a deeply embittered supply teacher. Still sexy, though.

More a fantasy scenario, since you (A) stood no chance with someone way out of your league, and (B) they might have been an utter twat. But here are the random strangers you still carry a minor torch for:

Who could not be attracted to Debbie Harry? However, even if you exchanged a few amusing words at the bar, it’s not really a basis for a relationship. Due to not actually knowing her, she might have been into Wicca, eating roadkill or something equally relationship-breaking.

Your heart probably melted over his lovely locks and impressive cheekbones. However you’re probably well out of it because if you’re that good-looking you’re bound to be a dreadful narcissist with a tedious range of male hair-care products.

Amid the endless parade of arseholes you have to work with, there is the occasional really nice one. Who you won’t get to shag.

Workplace competence can be strangely attractive, especially if combined with nice hair. Unfortunately a properly successful female boss will already be going out with a successful high-achiever, unlike a troglodyte like you who can’t add up the invoices properly.

Same problem applies. While charming company and a nice person, he is deeply settled with a beautiful woman and a lovely family. They go sailing to Greece together, the heartless bastards. 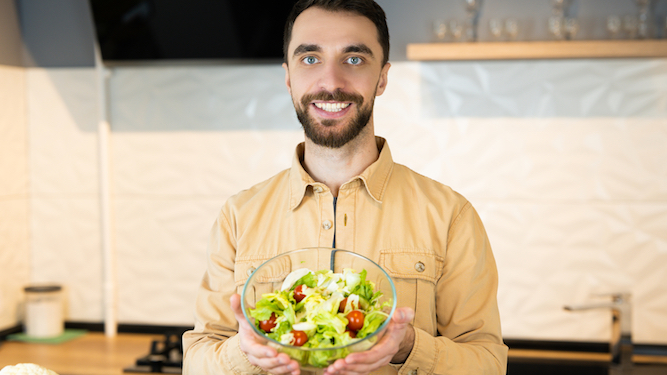 GOING vegetarian is good for the planet and does wonders for your sense of self-righteousness. Here’s what you’ll receive when you make the switch.

Your new lifestyle will be taken personally by people who still graze on cows and pigs, so be prepared for some light-hearted jibes to come your way. Instead of letting their words roll off your ethically superior back, fight fire with fire and call them murderers. This will definitely make them change their cruel opinions.

A thank-you note from the animal kingdom

Once the last chunk of meat vacates your body, a note of thanks from the animal kingdom will drop through your letterbox. It’ll be indecipherable of course because they can’t hold a pencil and don’t know how to write, but it’s the thought that counts.

Permission to live however you want

Ditching meat is the best way a person can reduce their carbon footprint, meaning you can do whatever the f**k you want now, completely guilt-free. Nine long-haul flights a year? Knock yourself out. Don’t want to rinse plates before you put them in the dishwasher? You’ve earned that privilege. Greta Thunberg probably has a poster of you on her wall.

Your new diet of beans and more beans will leave you bent double with trapped gas. Before long you’ll be letting rip constantly and creating a horrendous stink, which will take the shine off your high and mighty attitude somewhat. Much to the relief of everyone you know.

A packet of bacon rashers

Everyone says bacon is the food that will make you fall off the veggie wagon, so keep some in the fridge to build up your self-discipline. You could even try frying some in a pan to test your endurance, and maybe take a little nibble just to check that you definitely don’t miss it. How else are you supposed to know?