THE Chromebook will remove the final place where consumers can try and hide from Google, the company has announced.

The new not-computer will remove the need for you to store your innermost secrets on an old-fashioned hard-drive that sits in your house and can be disconnected from the internet, rather than in a massive, air conditioned shed in the middle of nowhere, owned by Google and that is the internet.

A spokesman said: “Because the Chromebook is entirely web-based it does away with those annoying programmes and applications that need to be constantly updated in order to protect you from large corporations and their insatiable desire to know everything about you.

“From now on, we will protect you. And, take our word for it, we know exactly how much you want to be protected.

“Yes, that does include you, Stephen from Finsbury Park. We know that you lie awake at night fretting about your loss of privacy.

“We know that shortly after you got up and went to the toilet at 2.14am on Tuesday the 3rd of May, you logged on to check that your email account had not been hacked.

“We know that the reason you are so anxious is because you are worried someone might discover your elaborate and detailed fantasy about paying clowns for sex before strangling them with their own giant shoes.

“And we also know that’s just the tip of a very large and disgusting iceberg, don’t we Stephen?”

“Well don’t worry, because with a Chromebook you won’t need to keep that sort of weird filth lying around the house. We’ll keep it in a big shed in Arizona.

“And you don’t need to worry about us telling people about what you plan to do with all the dead clowns, because we don’t do evil.

“We don’t even fantasise about it.

“Now then Stephen, how many Chromebooks can we put you down for?”

Britain 'could do more' to discourage tourism 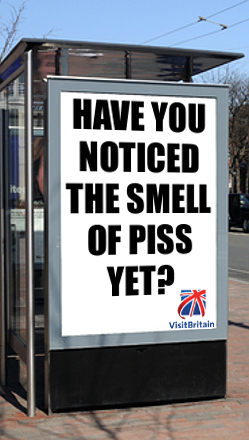 TOURIST attractions in the UK must redouble their efforts to stop the place being overrun by foreigners, officials have warned.

As the latest Lonely Planet guide dismissed the country as overpriced and uninspiring, tourism authority Visit Britain asked the publishers not to forget it is also bastard freezing most of the time too.

They have now requested that the cover for the UK guide be a photograph of a teenager being listlessly fingered in a Carlisle bus depot and for the prose to be re-written by a provincial insurance salesman.

A Visit Britain spokesman said: “We’ll discourage every last fat, rucksack-wearing shit from strolling along the train platform while I’m trying to get to cocking work, even if it means raising the prices at Tussaud’s to £300 to look at a replica Alan Titchmarsh.

“To be fair, the North has been doing a cracking job for years by being insanely dangerous and filled with dialects while East Anglia is essentially a giant pond full of things that might leap out and try to fuck you at any second.

“But some of Britain is actually quite pretty, so we’ve had to fill those parts with bleak mediocrity-bunkers posing as B&Bs that charge a week’s wages to sleep in a stained cot that smells like damp from the 1950s.”

Further discouragement will include a new visa requirement for tourists to watch an hour of regional television from any part of Britain they intend to visit, as well as being kept on the plane until they have read a whole Melanie Phillips column.

The spokesman added: “It’s actually a shame all those lives were lost defending us from invasion during the war, because I think even the most determined megelomaniac would lose heart by the time they got to Maidstone.”