BRAIN scans that can read your dreams need to be stopped immediately, it has been agreed.

Japanese scientists unveiled the technique before being told to put it back in its box, set fire to the box, mix the ashes with some leftover mince and then feed it to a terminally ill dog.

Professor Henry Brubaker, of the Institute or Studies, said: “You are intrigued. Do not be.

“The last thing humanity needs at the moment is a glimpse of each other’s subconscious.

“Every single one of us will declare ourselves to be an independent country with an incredibly strict immigration policy.”

He added: “If we see each other’s dreams we will never be able to look at each other again. We will all be Medusas, our gaze turning each other into blocks of horribly embarrassed stone.”

Tom Logan, a dreamer from Stevenage said: “Last night? Four giant, 30-foot tall spaniels having deafeningly loud sex with this guy I worked with at the Royal Mail sorting office during university holidays.

“And then they start tumbling through a series of rooms from different houses I have lived in.

Apple HQ 'is giant ouija board' 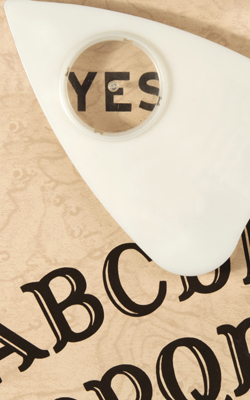 THE Apple corporation’s new HQ has been designed to channel messages from Steve Jobs.

Leaked plans showed that the giant circular structure’s inner ring would be divided into segments, each labelled with a letter of the alphabet.

In the centre stands a huge wedge-shaped object that up to a hundred employees would simultaneously touch while asking Jobs for guidance.

However work on the $5 billion structure has been postponed after it emerged that Apple had given most of its money to a medium called Madam D’Ananas who told them ‘Steve says you should do some jumpers’.

An Apple spokesman said: “It’s not like we’re freaking out or anything. We know Steve’s out there and he’s going to make everything right.

“Just yesterday a magpie landed on my office window and cawed twice. Are you telling me that’s coincidence?”

Employee Julian Cook said: Since things got tougher, this corporation has become obsessed with the spirit world.

“I said in a meeting our competitors are making products of comparable quality for a cheaper price, but everyone ignored me.

Then I said it again in a spooky voice, using a crystal ball instead of a projector and got a standing ovation.