THE cancer which claimed Christopher Hitchens was either random or stupid, it has been confirmed.

Hitchens passed away yesterday, prompting those he slapped up and down the street for the past 30 years to ponder whether or not he finally understood why God had invented malignant cells.

But experts said that after looking at cancer through a microscope for most of their lives they would have reassured the celebrated polemicist that it was almost certainly a result of random genetic mutations, but that if it was designed it was done so by a grade-A cretin.

Oncologist Dr Helen Archer said: “It’s not very intelligent to design something and then give it cancer. It’s like putting petrol in a diesel car. It is dimwitted.

“So if I had met Mr Hitchens I would have said to him, ‘if there is a God, he’s a fucknut, so you were half right’.

“And then I would have ducked as a bottle of Johnny Walker Black Label hurtled over my head and smashed against the wall behind me.

Hitchens’ religious opponents used his absence to continue their argument with him by ensuring that every single one of their statements made his point for him.

And George Galloway, the pro-Saddam cat impersonator who this
morning used Twitter to revel in Hitchens’ death, was once again forced
to wonder who will bother to clean and change him when he finally
becomes incontinent.

Meanwhile, friends and relatives of Hitchens have been urged to set up a foundation in his name devoted to the study of using your brain to squeeze the most out of the one and only life you will ever get, even if you have to wash it regularly in lukewarm Scotch. 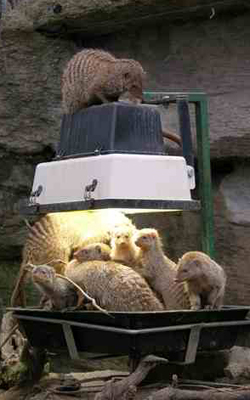 A CANADIAN zoo has announced plans to construct a specialist nightclub for its homosexual animals.

The zoo, which is home to a male penguin couple and a bi-curious anteater, has begun construction work on a multi-species gay animal nightspot called AnimXS.

Head homosexual animal keeper Stephen Malley said: “It can be hard for gay animals to express themselves within the hetero-centric confines of the conventional cage or tank.

“AnimXS is a modernist three-floor structure where like-minded animals can meet, hang out and party to throbbing hard house.

“For creatures who want to further explore gay subculture, we have specially-fitted denim and leather wear. Komodo dragons look great in biker caps.

“Interested animals will be given a special key allowing them to escape their enclosure, dance through the night and then get home at dawn, without their social group being any the wiser.”

“And while I think this is a step in the right direction, I worry that AnimXS will perpetuate the stereotype of gay animals as being debauched night crawlers.

“For example I don’t think there should be something called a ‘fuck room’. And I certainly don’t think the public should be able to pay a pound to look through its thickened glass windows.”