HOTMAIL has been re-branded as the uber-cool Outlook, leaving many too intimidated to use it.

Microsoft had been concerned that their webmail service had lost the ‘cool factor’ that is essential for things that send and receive electronic data, with many users defecting to the ultra-chic Gmail.

“If you can’t handle that, you might as well kill yourself.”

However the strikingly hip new Outlook, with its zeitgeisty picture of a woman on the sign-in page and trend-centric features as automated message-sorting, risks alienating those users who aren’t stylish and sexy.

Former Hotmail user Emma Bradford said: “Outlook is just too trendy for me. I stuck with Hotmail because I’m not a confident person who goes to yacht parties, like Gmail users.”

Sales manager Tom Logan said: “I don’t want my email to be sexier than I am. It’s too much, it’s like being in Blade Runner or something.”

Technologist Roy Hobbs said: “It looks amazing but because of its incredible slinkiness every Outlook email I write ends up being about sex and parties.

“I must get back into my AOL account, I never get unwanted erections while using that.” 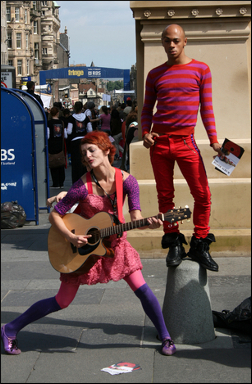 Every year thousands of talented young hopefuls arrive at Scotland’s most relatively picturesque city, with little in their pockets but dreams.

Those dreams will be crushed mercilessly, then their owners’ faces ground into the resulting dream-shrapnel while they scream and beg for mercy. No one will help them. Welcome to Edinburgh!

Picks from the Edinburgh Festival 2012 (actually a vast number of festivals happening simultaneously including the Fringe, the Arts Festival and the Distraction Burglary Festival):

TV’s biggest stand ups trying out new material for their lucrative corporate gigs. A great chance to catch some huge stars in an intimate 101,500 seater venue before self-loathing eats them from the inside out.

Someone from Hi De Hi Who Doesn’t Realise their Appeal Is Largely Ironic  (Mirth Bunker, £10)

A former cast member from 80s sitcom Hi De Hi (identity TBC) who has no idea the assembled hipster audience is laughing at them but not with them.

Funded by a regional grant, this performance piece fuses dance, mime and puppetry to tell the story of the Loch Ness monster’s penis from being soft to going hard.

US sitcom star Weinberg is making absolutely no effort for his first Edinburgh show because he is famous in America for the series My Girlfriend’s Farts. Look out for him punching an audience member when his non-material fails to ‘kill’.

Yes I’m Mugging You (A back street, whatever’s in your wallet)

A fully immersive mugging experience that blurs the boundaries between performance art and crime.

This year, performers are taking their inevitable meltdowns onto the streets. When the combined effects of poor reviews, sleep deprivation and a diet of something called ‘Butter Tablet’ kicks in, they could either curl into little balls like hibernating mammals or grab the nearest heavy object and start smashing windows while heavily salivating.