GORILLAS who display signs of human-like emotions and reasoning are still no closer to building a Delorean that can travel through time, experts have claimed.

Work on the 'Project Lightning' experiment began in July 2003, after one of the large males at London Zoo got hold of a model of the car from Back To The Future that had been dropped into his pen, and began to assemble a crude mock-up of the exhaust manifold using twigs and excrement.

But project director Dr Andrew Mellor yesterday spoke of his anger at having his hopes raised by the disappointing primates.

He said: "We played them the movie, which they seemed to love, and it appeared that most of them understood the basic principles involved in using a lump of Plutonium to generate the 1.21 gigawatts of electricity required to send an 80’s sports car back to 1955.

"One of them, a large silverback called Basher, even started to urinate into his own mouth – something he only does when he gets very excited.

"We sat the gorillas down in a specially designed pen full of car parts, wires and bits of old washing machines and stuck a whopping great poster of the car on the wall.

"I turned to the animals and repeated ‘you must build this’ three or four times in a very clear and coherent tone so there’s no way they could have misunderstood me."

But zoo curator Dr Sarah Johnson said: "Since 2003 we've spent almost £3.5 keeping them up to date with tools and the latest literature on the space/time continuum but they clearly have even less knowledge on how a flux capacitor works than the crested macaques.

"They're all going back to their enclosures and if any of them start asking for  extra bananas to power the car's 'Mr Fusion' device, I shall taser them." 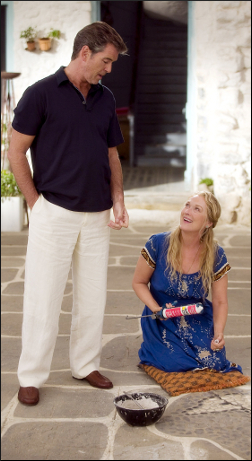 MALE sex addicts are being cured of their impulsive desire for women by watching the smash hit musical Mamma Mia!

Married men who are wealthy or attractive enough to be promiscuous but then get caught have been checking into a clinic where they are strapped to a chair and have their eyelids pinned open with bulldog clips before sitting through the 108 minute film.

Professor Henry Brubaker, of the Institute for Studies, said: "When it's finished we wait until their breathing has returned to normal and then tell them that all woman love that film.

"After leaving the room they are unable to look at a woman and even the faintest whiff of perfume is enough to make them vomit."

He added: "For someone with a particularly strong addiction we start them off in WH Smith gazing at the row upon row of dead trees that have been used to tell women that a small group of no-talent skanks will get through whatever mildly stressful situation they are currently experiencing."

Addict Julian Cook said: "The first 20 minutes or so weren't too bad as I've always secretly liked a bit of Abba. But as the film progressed into increasingly raucous scenes of dancing, yelping and general female wish fulfilment, I was seized by a terrible headache, like the menopause was somehow getting in through my eyes and squashing my brain.

"Meanwhile, as I'm starting to hyperventilate, the female technicians were standing around drinking cheap fizzy wine, singing along at an unbelievable volume and cackling at each other like idiot witches in too much make-up."

He added: "Since leaving the clinic, I have been utterly terrified of vagina owners and indeed anything remotely feminine.

"I could possibly have sex with Jason Donovan, but that's about it."