Secret of looking young is self-delusion

THE best way to maintain youthful looks is to live in a delusional fantasy world, it has emerged.

Researchers at the Institute for Studies found that anti-ageing creams, exercise and diet were far less effective than simply kidding yourself you still look 21.

Professor Henry Brubaker said: “Successful anti-ageing techniques include only glancing in the bathroom mirror very quickly so your brain doesn’t have time to register your grey hairs and wrinkly eye sockets.

“One method for men was convincing themselves that teenage girls in the street were eyeing them up, rather than hoping they weren’t a friend of their dad who would dob them in for smoking.

“Some older women use the tactic of only flirting with service sector workers such as waiters, rather than ‘non-captive’ men in pubs and bars who could escape from their gruesome middle-aged sex banter.

“Others asserted their youthfulness by slavishly wearing the latest fashions, which is unfortunate given the current popularity of hotpants, tight tops and morbid obesity.”

Office manager Roy Hobbs, 49, said: “People think I’m a lot younger because I go to lots of indie gigs. The interns at work love hearing about The Family Cat and The House of Love.”

Account executive Donna Sheridan, 52, said: “People are always asking if my daughter and I are sisters, which is great if you like compliments from sleazy, unoriginal men.” 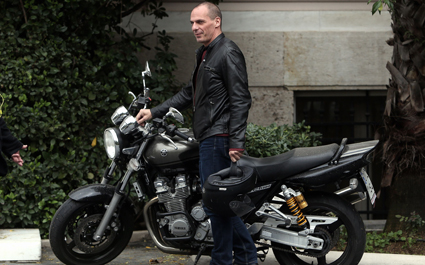 GREECE’S former finance minister has unveiled plans to ride around on his motorbike having martial arts battles with local villains.

The freewheeling politician said he will go to whichever small town needs his help, taking manly temporary jobs like labourer or nightclub bouncer and standing up for locals against corrupt local bosses and their heavies.

He said: “I will ride into town, get a room in a local boarding house and establish a simmering sexual chemistry with the widowed but still beautiful landlady.

“Then I go into a bar where toughs in sleeveless denim shirts are harassing the waitresses. I beat them up using a mixture of kung fu and kickboxing techniques, stopping short of killing them because I hate violence.

“The elderly owner, who has a beautiful daughter, buys me a drink while explaining that the town is in the iron grip of someone called Mayor Angelis who everybody lives in fear of. To which I say something like ’not any more’.

“Then I either go and beat up all the villains in a spectacular battle, or decide to just ride off at that point leaving everything in a worse mess than before.”