Should I share naked pictures of myself online, or wait no stop don't f**king do that

THINKING of sending naked pictures of yourself to someone you barely know online? Ask yourself these questions before doing this very obviously stupid thing.

Do you leave naked photos of yourself on lamp posts?

Ask yourself: is this a normal way to start a relationship?

Will it make you popular? Really?

Take note, teenage girls. You should realise by now that teenagers can be total hypocrites about the thing they’re obsessed with, sex, and won’t miss an opportunity to call you a slag. It’s like egging a mate on to down a pint in one, then disgustedly saying, ‘You’ve got a serious drink problem, Carl.’

Can you be sure the lucky recipient won’t share them?

Chances are the person wanting the nudie pics is a teenage boy or an early 20s lad, and they will do anything to impress their mates. How long are they going to keep this fizzing bundle of sexual dynamite secret? About 25 seconds, if they’re particularly mature.

Can you guarantee your relationship will never go tits up?

Even a long-term, grown-up relationship can go wrong, and you’ve just handed your partner a massive box of ammunition to get revenge in the future. It does raise serious questions about why you were going out with the sort of twat who’d post the pictures for your boss, friends and mum to see. Oh. You’re the sort of idiot who sends nudie pics to strangers. Mystery solved.

Ask: what am I getting out of this?

You’ll have briefly gained the approval of someone who is at best a knobhead and at worst a f**king pervert. The benefit to you is pretty much bugger all. So all things considered, it’s clearly a bad idea. What’s that? You’ve just sent the pictures anyway?

How to think you're dieting, by a man 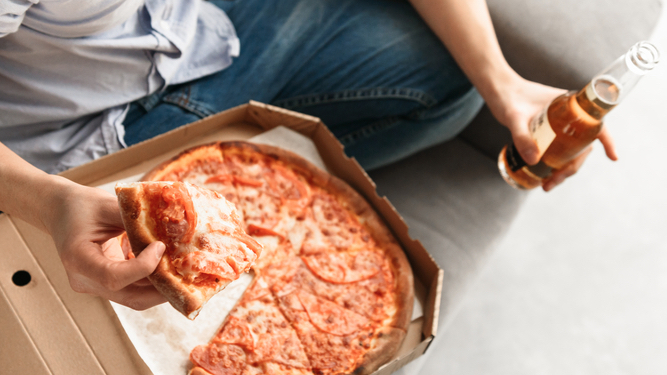 CONSIDERING half-heartedly trying to lose weight? Allow a man to give you tips to ensure you never really commit. By Wayne Hayes.

Being a savvy shopper will help you ‘lose’ weight. Buy even larger sizes of clothing than you need, then after eating a few less biscuits convince yourself all your clothes are ‘hanging off you’. Buy low-fat alternatives but only for your nighttime snacks and reduce your ‘treat days’ to ‘not Wednesday’. Very sensible, because all the experts will tell you crash diets don’t work.

Reducing portion sizes is important to weight-loss. Appear to do this by using smaller plates but stacking food vertically. Cutting a large pizza into stackable slices is also a great workout. Only do two chewing motions with your jaw before swallowing. This will dramatically decrease time spent eating, thereby creating extra time for exercise, or, more probably, coping with indigestion.

At every opportunity bore people stupid with your ramblings about dieting. Rattle on incessantly about your plummeting BMI and uniquely high metabolic rate. Mention dull foods like Ryvitas, bran flakes and falafels. No one will question your non-existent weight loss in case it sets you off about broccoli pasta again and they don’t give a high-fibre shit.

Exercise combined with cutting calories will shift weight faster and keep you motivated. This can be surprisingly easy – you’re so overweight and unfit that getting into the bath, changing a pillow cover and picking up a dropped biro are now all punishing exercise.

Smoke and mirrors are everything. Greet everyone slightly side-on to prevent an accurate impression of your frame shape. Program your smartwatch to ping an achievement for every 20 steps forwards, or five upwards. And never be seen without a bottle in each hand: one water, one your own special ‘smoothie’ of puréed meat pie, chips and gravy.

Show your commitment to the concept of dieting – as opposed to actually losing weight – by creating a vlog showing the opening of yoghurts and snapping of crisp breads without either being consumed. Be careful not to capture the takeaway menus lying around and the plastic containers of mixed nuts and berries still with ‘sweet and sour pork’ scrawled on the lids.