A STUDY of baby names has highlighted the trend for naming children after popular brands.

Samsung is currently the most popular name for a boy or a girl, closely followed by Nescafe, Adidas and Kentucky Fried Chicken.

Professor Henry Brubaker of the Institute for Studies said: “The fashion for celebrity-inspired names has subsided, parents want something that is more original but can still be gotten from a magazine with minimal effort.

“Also brand names are mostly non-gender specific, and can be written as words or a logo, which is handy if you aren’t great at spelling.”

Emma Bradford named her son Durex after the condom that split on the night he was conceived.

She said: “It sounds trendy and space-age, like a martian prince. Also it will serve him as a reminder that no contraception is 100% reliable.

“If he decides he doesn’t like Durex, he can always use his middle name, Beats By Dre.”

He said: “We’ll see more kids called things like Xythltx794, or even just being nameless but identified by a specific item that they have to carry about with them, for example a 70s swivel chair.” 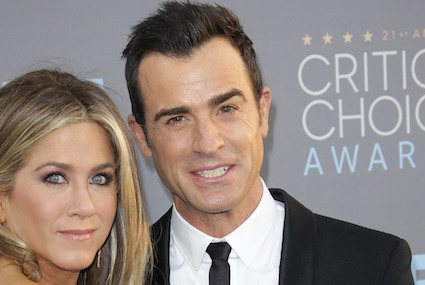 SCREEN siren Angelina Jolie is to help herself to Justin Theroux, her spokesman has announced.

The romance began on Monday when Jolie saw Theroux’s handsome face in a newspaper, above a celebrity news story about something irrelevant.

Summoning a minion, she tapped the image with a sensual crimson talon and said: “I want this one. Bring him.”

Within an hour Jolie’s team of winged, bisexual eunuchs had snatched Theroux from a party in Los Angeles, carrying him off like muscular birds of prey as fellow guests looked on aghast.

Theroux was relocated to the actress’s sexorium, a giant sex-themed perspex globe atop Jolie’s LA residence, where she sits on a black leather throne presiding over pools of baby oil teeming with writhing, gossamer-clad nymphs.

A Hollywood source said: “Angie has the only key and the exit is guarded by a sex midget with steel teeth.”

Jolie’s former paramour, the actor Brad Pitt, has agreed to continue cohabiting with the actress as a hapless underling.

His job will be to hold a giant palm leaf and waft cooling air over Jolie and Theroux as they are in the throes of passion.