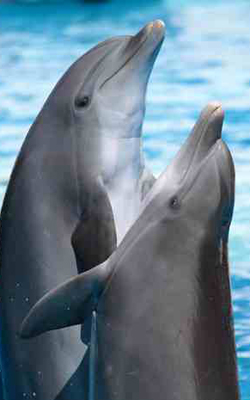 SCIENTISTS hoping to give dolphins the same rights as humans have been told to button it by the creatures themselves.

The group’s conclusion that dolphins should be considered equivalent to homo sapiens met with a fierce chorus of squeaks and clicks from the coastline near the conference centre, with several windows being broken by large multicoloured balls.

Tom Logan, a four-year-old bottlenose dolphin from the Atlantic Ocean, said: “While we’re very flattered you think we rank alongside the cast of Glee we’d much rather carry on being considered as those smiling fish terminally-ill people swim with.

“I caught an episode of Geordie Shore the other week, while my cousin recently swam past Magaluf on a Friday evening and based on that evidence I think I speak for us all in saying we’d rather take our chances with the three-mile drift nets, cheers.”

Logan also requested that the existing payment ratio of fish-to-somersaults should not be affected by the UK government’s Workfare scheme.

Logan’s fellow pod member Nikki Hollis said: “Just leave us alone to eat as much fatty mackerel as we like without a GP telling us off, and to swim fast and free in open waters without getting a £75 fine.”

The female added: “I was born a dolphin and I’ll die a dolphin, probably because some fisherman has shot a harpoon through my blowhole, but better that than I end up crammed into a Piccadilly Line train in rush hour, staring gloomily at a Kindle.”