HARDLY a week goes by without some confected controversy like ‘cancel culture’. But how do they compare with the public outrages of the 1980s? Let’s find out.

Somewhat undermined by the films in question being extremely shit (Last House on the Left) or humorous gore for horror buffs (Texas Chainsaw Massacre). Also, they were impossible to get hold of, especially on Betamax. Bullshit controversy rating: 7

Somewhat undermined by it always being deliberately provocative right-wingers who always get ‘cancelled’ yet make lots of money from it. ‘Grift’ is a harsh term but let’s be honest, there’s more grifting going on here than in the film Grifters. Bullshit controversy rating: 9

Although actual skinheads included plenty of racist thugs, bizarre scare stories about them abounded. Skinheads were going to turn up at schools and slash people. Skinheads had stripped someone and glued them to a railway bridge, a truly odd myth that neatly incorporated that other 80s obsession: superglue. All a bit unfair on skins who were just ska fans. Bullshit controversy rating: 5

One statue has been pulled down so far, threatening the very existence of the UK. Also, graffiti has been sprayed on some other statues, which would probably make the actual Winston Churchill say ‘Why are you wasting my time with this?’. Bullshit controversy rating: 8

Big in the 80s, especially in the States. Everything from cack solo albums by Ozzy Osbourne to Dungeons & Dragons was targeted. This had some bad real-world consequences, but mostly just led to people knackering their heavy metal albums by trying to listen to them backwards. Bullshit controversy rating: 6

Do you even remember Momo now? Or fear the Slender Man? And any adult dense enough to eat Persil capsules to win an internet challenge suggested by cackling trolls gets limited sympathy. Bullshit controversy rating: 8

With the scores on the doors, 25 to 18, bullshit controversies are much better now. Get furious about political correctness then watch Driller Killer to chill out.

How to embarrass yourself horribly while getting vaccinated 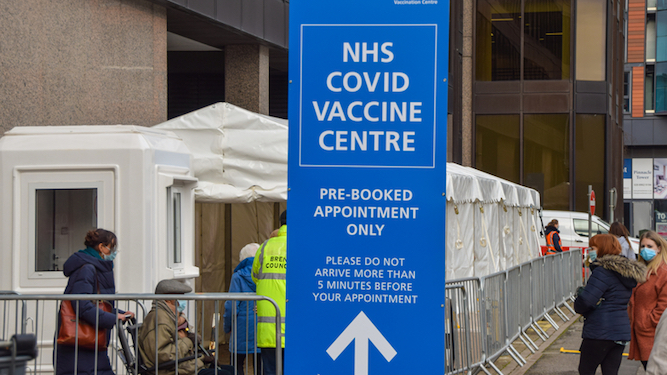 WITH the vaccine programme working its way down the age groups, it might not be long before you are making a tit of yourself as you get vaccinated. Here’s how.

It’s important to remember that vaccination is not an injection in the arse with a massive needle, like in a Carry On film. However if you bend over with a grim look on your face, the staff may get confused too and you’ll get a bonus prostate check-up without having to wait six months for an appointment.

If you faint at the sight of a needle, make sure you get it out the way early by fainting in the car park of the vaccination centre. That way you’ll be rushed in and jabbed first, all while unconscious. You can still lie about it being ‘no big deal’ later.

Ask the nurse out

Nurses are both attractive and caring in TV and films, and after a year of mega-publicity their sexual allure is particularly potent. Even Charlie Whitehead out of Casualty would be smokin’ hot with a bit of Munchausen Syndrome. Don’t wear jogging bottoms to your appointment, because it looks as if you haven’t made an effort on your first date. Also erections.

A surefire way to embarrass yourself in front of a medical professional is by nervously joking your way through the experience. They’ll have heard jokes like ‘feeling a little prick’ about three zillion times before. Although they might offer you a child’s lolly, so go for it.

Shamelessly get your vaccinations done strangely ahead of the queue by being closely related to the prime minister. You might not find it embarrassing but everyone else will.