MILLIONS of demented British pensioners are to be released from their cages thanks to a new electronic tagging device.

Campaigners, including Help the Aged and Age Concern, said the tags would help Britain comply with new EU regulations designed to end the scandal of overcrowded pensioner sheds.

Tom Logan, deputy director of Age Concern, said: "For years the UK pensioner industry has kept old people in rows of tiny cages because it made so-called 'economic sense'.

"But their natural instinct is to range over a wide area, looking for things to eat, covering themselves in dust and emptying their bowels on fresh grass."

He added: "Over the years we have been able to release hundreds of old people and allow them to roam free and follow their natural instincts.

"Unfortunately many of them do have a tendency to roam into Currys and claim to be having lunch with Katherine Hepburn."

Mr Logan said the new tags would allow free-range OAP-keepers to leave doors and windows open, safe in the knowledge that if a pensioner does roam too far they can be quickly caught, sedated and returned to their big chair in front of Deal Or No Deal.

What In The Name Of F*ck Is Wrong With You People, Declares Un 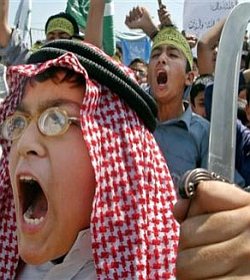 THE United Nations last night passed an emergency resolution calling on the people of Pakistan to explain exactly what the fuck is wrong with them.

With Pakistan leapfrogging France to become the third maddest place on Earth, the international community has called on the country to sit down, take a deep breath and explain what in the name of all things Godly it was thinking of.

"Still, they may be out their minds but at least they are not in a strategically vital position and armed to the teeth with nuclear weapons. Oh, hang on, they are. How fucking splendid!"

Last night the UN security council debated a series of resolutions including, 'What the fuck?', 'Are you fucking kidding?' and 'Can we just pretend they don't exist?'.

After last-minute wrangling senior diplomats passed resolution 1795, stating: "The United Nations calls upon the people of Pakistan to explain what in the name of fuck is going on.

"Furthermore, we urge you to get a bloody grip and realise that you don't have to end absolutely every single argument by blowing someone to pieces."

Ali Zalfaqir, head of unspeakable atrocities at the Pakistan Movement for Constant Misery, said: "It is perfectly reasonable for us to question her health and education policies by shooting her and then blowing her up.

"For her to then die as a result is little more than cynical electioneering."