THE BBC last night defended a new series that hopes to find the best new under 14 pole dancer in Britain.

Many entrants have been perfecting their routines during PE lessons and some schools have incorporated picking up pound coins with buttock cheeks into the curriculum.

Mother of eight Nikki Hollis is hopeful that her 12-year-old daughter Subaru will impress the judges with her gyratory interpretation of Christina Aguilera's Dirrty.

Hollis said: "She's been so excited for weeks and we've all chipped in to help by sewing little sequins onto her thong and braiding her hair with straggly blonde extensions. For her birthday we bought her a tattoo of the celtic word for 'cheap' on the small of her back. It looks really classy."

But omnipresent TV psychologist Linda Popadopoulos warned the BBC was setting a dangerous example, adding: "The average young teenager isn't psychologically mature enough to cope with decisions like whether to baste themselves with cooking oil or do a back flip onto a beer bottle.

"We should allow kids to be kids and do normal things like killing small animals or setting fire to anything that stays still long enough for them to hold a match to it."

But a BBC spoeksman defended Skankz, adding "We have a long history of producing challenging, innovative programmes for children including last year's Teen Guantanamo and Lordy! My Dad Is A Crack Dealer!.

"Skankz is a chance for Britain to show that we can match any country in the world for producing talented young trollops. Except for the Americans, obviously." 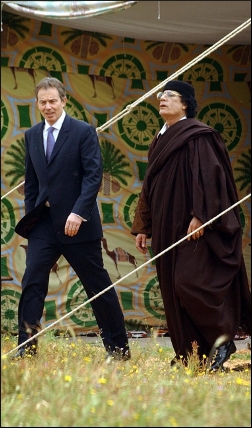 TONY Blair has backed Colonel Gaddafi's call for the annihilation of everyone in Switzerland.

The former prime minister telephoned his friend last night to offer support and promised to use 'whatever diplomatic influence he can' to ensure the mountainous, low-tax country ceases to exist.

The two men have been close since 2004 when Mr Blair decided British oil interests were more important than keeping your distance from terrorist psychopaths.

He said: "Muhammar is a strong, wise leader of a great people who sit atop billions and billions of gallons of thick, black money. Death to Geneva!"

Colonel Gaddafi has called for Switzerland to be wiped from the face of the Earth after it arrested his ghastly son and made some minor changes to its planning regulations.

He told a crowd in Tripoli: "Let us wage jihad against Swiss planners, excellent time pieces and Toblerone. Oh, and Zionism as well, obviously.

"Any Muslim in any part of the world who eats one of those little triangular pieces of chocolate with the bits of nougat in it is against Muhammad, God and the Koran.

"And no hard, nutty cheeses either. If I catch you eating Emmental I'll fire you out of a cannon."

The Libyan leader then sang Guns'n'Roses' Sweet Child of Mine in a squeaky falsetto and granted the freedom of the city to a bowl of Rice Krispies.

Denys Finch-Hatton, Mr Blair's former foreign policy adviser, said: "Our diplomatic efforts with Gaddafi were about securing valuable British money and restoring Libya to the community of civilised nations. And as you can see it's working like a charm."

Meanwhile Gaddafi was was also backed by the Scottish National Party, his Edinburgh-based fan club, who said they hoped the Lockerbie bomber would be able to perform one last atrocity in the centre of Zurich before he finally dies of cancer three months after he was definitely supposed to.