A CHARITY set up to protect teenagers from bullying cannot tell when it is being lied to, it emerged last night.

Beatbullying said that more than a third of teenagers had been sent a sexually explicit text message which they found distressing, even though they obviously didn't.

Professor Henry Brubaker, of the Institute for Studies, said: "There are still too many vulnerable anti-bullying charities falling victim to teenage liars.

"Teenagers get the hang of new technology very quickly and are soon able to use it to lie to charities, generate excited press coverage and generally get everyone to waste their time."

Prof Brubaker said the most common way of lying to a charity is via an anonymous online survey, though there are still hundreds of old-fashioned teenagers who prefer to tell charities the most outrageous lies to their face.

He added: "Teenagers are like Nick Cotton from Eastenders. They betray you and then come back a few months later and convince you they've changed. It's easy to forgive them because they're such good liars, but eventually they will try to kill you with poisoned yoghurt."

Keira Thompson, 15, from Hatfield, said: "My friend's boyfriend's brother sent me a text last week about putting his big fat cock into my poo-nanny.

"The charity people asked me if I found it upsetting and because I had not been the centre of attention for about 20 minutes, I decided to say yes. I even managed to cry."

She added: "But the fact is, whenever I get a text about someone's big fat cock I immediately show it to all my friends and we have right good laugh. Cock is such a funny word." 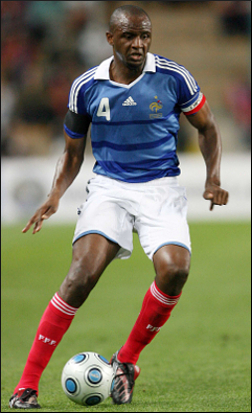 THE Vieira, a species of footballer not seen on these shores for many years, is coming back to its former ground to die.

Experts say that after trekking to North London from its feeding ground in Milan, it will roam the centre circle until early 2010, when it will finally succumb and the Fabregas will take over Arsenal's herd as the dominant male.

Eventually its remains will be picked over by vultures in the 'Midfielder's Graveyard', alongside the bleached bones of the Gilberto and the Ray Parlour.

Arsenal coach Arsene Wenger said: "The return of the Vieira to the ground of its youth is one of nature's greatest and most mysterious spectacles.

"No-one really knows how they find their way back. Is it smell? Is it sonar? Is it money?"

Vieiras typically play into their thirties unless poached by Italian clubs or viciously attacked by Bartons.  Although placid by nature, they can become easily enraged when confronted by Roy Keanes, only to suffer potentially fatal injuries.

Wenger added: "I want to give this magnificent Vieira a dignified last resting place. He can teach the younger players important lessons, like going fucking ballistic in the tunnel before a game.

"Besides, I need somebody I can talk to properly. I can't understand half of what the boys talk about. How can you spitroast somebody with a phone? It would melt."

The Vieira said: "Mon dieu, I remember when all this was industrial estate. I'm 33, you know. Of course, back in my day we used to win big metal cups. Everything's different now."