Competent cook convinced he is a fancy chef

A MAN has been deceived into thinking he is a professional chef by food websites and celebrity cookbooks.

Family and friends say mechanic Stephen Malley’s ability to follow reasonably straightforward recipes has caused him to descend into a delusional fantasy world.

Malley’s wife, Jane, said: “Stephen seems to believe he’s a Paris-trained chef because he can make beef stroganoff from his BBC Good Food books, even though it’s just stew with a bit of cream in.

“It’s embarrassing when we have people over for dinner because he expects them to be totally blown away by something piss-easy like fish pie.

“More worryingly, he keeps saying ‘We should open a restaurant!’ which I used to think was a joke until I found a document on his laptop entitled ‘Opening night menu’.

“It was full of pretentious cack like braised duck hearts with fennel broth.”

Malley denied having grandiose delusions about his cooking abilities, saying he had only been using the internet to look up country pubs for sale because of ‘something to do with work’.

He added: “You don’t become a top chef just by owning a few cookbooks. You have to take risks, like I’m doing tonight by putting some chilli flakes in my tuna and pasta bake.”

Lots of cake left over at Piers Morgan’s 50th 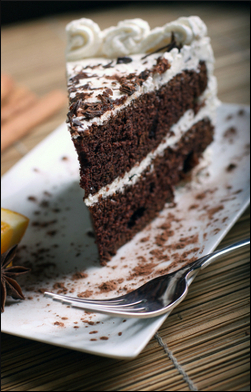 MOST of the food at Piers Morgan’s 50th birthday party remained uneaten, it has been confirmed.

The former Daily Mirror editor rented out his local social club for the event and spent thousands of pounds on catering and entertainment.

Norman Steele, who lives across the road from the club, said: “He obviously made a big effort. I could hear the music from the disco. I didn’t see many people going in though.

“The music stopped at about nine o’clock.”

Emma Bradford, a barmaid in the social club, added: “He did look a bit disappointed. He kept pouring people drinks just to get them to stay. Alan Sugar left early claiming he had food poisoning, but he looked fine to me.

“There was a really big cake and Piers was going to give everyone a piece to take home with them, but he had to take it all home by himself.”

Despite the poor turn out, Morgan was happy that his celebrity friends had left each other voice-mails saying they would not be going.