Fat People To Be Squeezed Into Camps

FAT people should be squeezed into specially designed camps so that children will not have to look at them, it was claimed last night.

A leading health expert said that fat stars such as James Corden, Beth Ditto and that awful Fern Britton should be dragged from their beds in the middle of the night and herded onto cattle trucks, while their homes and possessions are given to thin people.

Professor Michael McMahon, of Nuffield Health, described Corden, Ditto and Britton as 'baby-eating parasites' who had brought the country to its knees through their control of world capitalism.

He said: "The barrack huts should be as small as possible. This not only helps diseases to spread rapidly, it encourages the fat people to lose weight.

"Nothing will make you reconsider your lifestyle more than being forced to soil yourself because you're too fat to squeeze past all the fat people standing in the corridor."

Prof McMahon said that once the fat people have lost some weight they will be paraded naked before a children's jury who will decide whether they are still a bad influence.

He admitted that most communities would not want to have a camp-full of disgusting fat people on their doorstep and called for the first shipments to be sent to Southern Poland where there were 'easily adaptable facilities'.

He added: "Above the gate we could have a sign that reads Arbeit Macht Dünn or 'Work Makes us Thin'."

Martin Bishop, a television viewer from Stevenage, said: "Horne and Corden was not good, but I don't think you should put him in a camp. A hefty fine and an apology would suffice."

He added: "Maybe it's time we put public health experts in camps so they can experiment on each other until they create a master-race of perfect freaks."

But Prof McMahon insisted: "I think it's a remarkably civilised way of dealing with the problem. Personally, I think we should turn them into cat food." 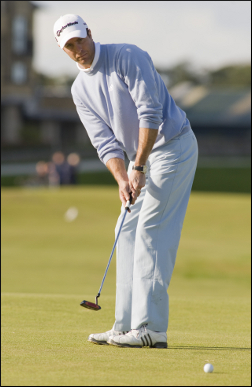 CRICKET fans were shocked last night after Michael Vaughan announced his retirement for what they were sure was at least the fourth time.

The former England captain said he wanted to spend more time with his family, standing in the back garden for 20 minutes with a confused look on his face before wandering back into the house while shaking his head.

Vaughan added: "I think I still have what it takes to look confused at that level", before retiring from back garden cricket for the first time.

His latest retirement follows his failure to be considered for the Ashes squad after scoring fewer runs this year than Michael Owen has scored goals while having hamstrings made from squeezy cheese.

Vaughan will be remembered for failing to lose on home territory to an Australian side riddled with injury. He was awarded the OBE shortly after for 'Services to stopping England giving up cricket altogether and inventing a new sport they can be best at for a few years until everyone else gets the hang of it'.

An ECB spokesman said: "As wretched as the current England squad is – and make no mistake they're about as much use as WG Grace's after shave balm – Michael now makes them look like a pantheon of invincible Greek deities."

The spokesman insisted the squad still had an outside chance of scoring a run against Australia this summer if they could just get the top end of the batting order to stop treating the ball like a tiny child.