A DESPERATE middle-aged man is stopping traffic and banging on bonnets to warn innocent motorists about the traffic that awaits them on the M5.

Roy Hobbs is frantically trying to warn as many people as he can about long delays between junction two and junction 19 but fears he may already be too late.

He said: “Please! Please! Just roll down the windows and listen to me! I’m not crazy! I’ve been listening to BBC Gloucester on the internet!

“It’s bloody solid down there, and the A-roads are even worse. It’s like nothing you’ve ever seen. Forget reaching Cheltenham. It’s gone.

“I don’t care what Google Maps says. Anyone driving southbound won’t be seen again. Please, if not for yourselves then for your families, your children.

“No! The black Renault’s already left! He’s becoming part of the jam! He’s one of them!”

Pope arrives in Dublin for stag do 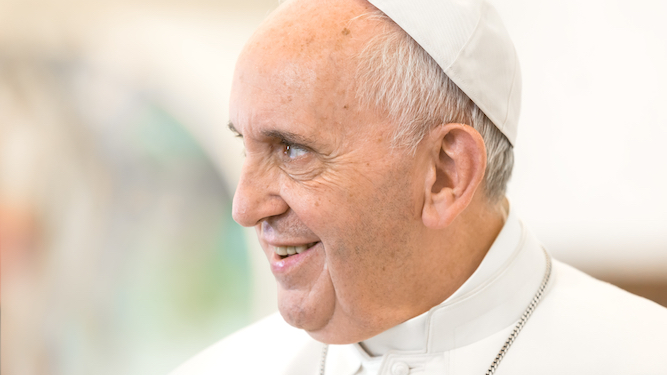 POPE Francis has touched down in Dublin for the two-day stag party of one of his closest friends.

The Pope is visiting Ireland for the first time to give old seminary buddy Cardinal Celentano the perfect send-off, and warned residents that it is likely to get messy.

He continued: “It’s a stag do and a leaving do because he’s been shagging this bird on the side, so this night is going off.

“Beginning in the old pubs where Jimmy Joyce drank, then we’re clubbing at Copper Face Jacks, then strippers. The whip-round didn’t make enough so I eBayed a little Michelangelo so they do him properly.

“Tomorrow morning we’re paintballing which will be an absolute disaster if we do it right, then we’re back in the bars for those of us can handle it. Bit of gak to help us along, in the old diplomatic bag.

“It’s gonna be fucking epic, I promise, and if anyone sees a suffering, Christlike figure shuffling along the Liffey in the wee hours that’s not a miracle, it’s Celly after we’ve taped his pants round his ankles and sent him to do a cock-out mile.

“Monday morning quick mass, forgiveness for all our sins, bish bosh, back on the flight. Sorted.”