THE gap between poor people and chickens is at its narrowest since 1945, according to a major international report.

The Organisation for Economic Co-operation and Development said Britian's domestic fowl are enjoying their highest standard of living since families kept backyard hens to ward off Nazis.

The OECD revealed many chickens are now enjoying better living conditions than people in the east end of Glasgow or some of the mankier parts of Leeds.

Report author Tom Logan said: "A lot of chickens don't feel better off because they read magazines like Hello and see lots of humans who aren't scraping bugs out of the ground and living in their own shit."

But the report says the gap between chickens and rich people remains one of the widest in the developed world.

Mr Logan added: "More chickens are being eaten by more rich people, often in some sort of jus. The inequality gap doesn't really get much wider than that.

"Jamie Oliver and Hugh Fearnley Whittingstall have done a lot, but many chickens still feel that not enough poor people are being throttled and then roasted with garlic.

"I guess we'll just have to wait for the next series of River Cottage." 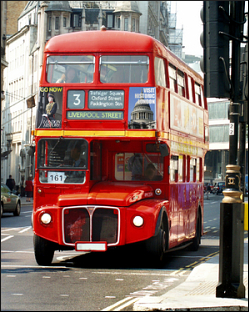 The Humanist Association is to spend more than £20,000 on adverts declaring: "There is probably no God, so you should probably stop worrying and probably enjoy life. Then again, maybe not. Who knows?"

But Stephen Green, director of Christian Voice, said: "Any bus which allows itself to be abused in this way will spend eternity in the company of Satan's bus.

"They will burn alongside gay buses, buses that have had abortions and buses that knowingly took people to see Jerry Springer: the Opera."

Some London buses have refused to start, insisting the adverts have forced them to choose between their faith and their job as a bus.

Number 16, Cricklewood to Victoria, said: "If it wasn't for all those Christian adverts I carried as a teenager, I would have wound up in bus prison."

Meanwhile Roman Catholic priests across the capital have offered to exorcise any bus that carries the humanist message.

Father Joseph McKay, from Clapham, said: "A bus that cannot be cleansed of its demons will be condemned to bus hell where every bus is vandalised and every passenger smells of stale urine.