GATWICK has doubled its staff of surly baggage-flingers.

The move followed last weekend’s hold-ups which saw thousands waiting up to four hours to have their suitcases broken.

A Gatwick spokesman said: “We’ve screened candidates for brute strength and irrational hatred of luggage in all its forms.”

The delays have been blamed on planes landing with luggage inside that had to be removed and returned to waiting owners.

Gatwick has been advising travellers to use Heathrow or Stansted to avoid problems because everyone is a billionaire who can just charter a jet.

Burning Man festival being explained in a patronising manner 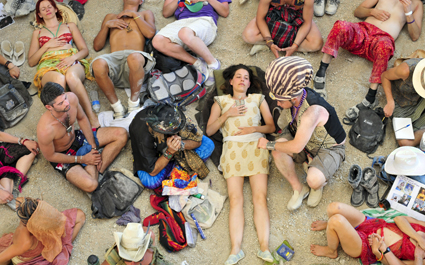 PEOPLE who go to Burning Man festival have been explaining what it is in a slightly condescending tone.

The US-based arts event, which takes place next month, has become an annual fixture for hippies, ravers and narcissists who aren’t certain you are open-minded enough to understand it.

“There’s no big acts, or money, and loads of nudity and face painting. It is wonderful but quite challenging, normal individuals like you would almost certainly not be into it.

“Obviously it would be great if you could be a part of it, I would welcome that, but it is pretty mental and you have to be certain your brain is special enough to handle something so enlightened.”

Office worker Emma Bradford said: “So it’s loads of people getting wrecked in a desert? I think I’m with you so far.”