A WHOLLY unremarkable, paunchy slob from Birmingham perfectly represents the man of today, it has been claimed.

38-year-old Dave, who works in an office, said in response to his accolade: “Oh right. Where’s my socks?

“I’m hungry, is there any crisps?”

Britain’s gender archetypes are determined annually by a group of people who hate people, which includes representatives from the advertising industry, television and the Daily Mail.

A media industry spokesman said: “Using sophisticated marketing algorithms, we have figured that females are most receptive to the purchase of crud when aspiring to be a neurotic super-geisha with a tiny dog and a house like a space station.

“Men are harder to crack because they have less self-esteem to destroy. So generally they’re better off providing the comic relief in adverts for cleaning goods.

“For example, the woman is frantically mopping the floor prior to a business meeting when her husbands shuffle in in his pants and accidentally tips custard all over to floor, then punches his forehead and goes ‘oh no, I am such a clown!'”

Woman Emma Bradford said: “I’m fairly sure I’m nothing like Victoria Beckham, who looks like a snake struggling to digest a pair of breast-sized eggs. And Jordan…well I’m fairly sure I’ve never had Dane Bowers’s big toe in my vagina.

“Dear God, there must be something wrong with me.”

Cameron to invade Isle of Wight 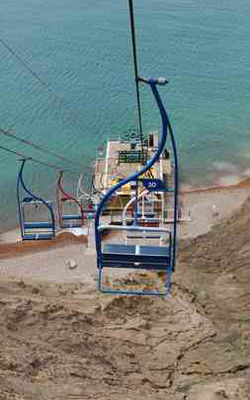 David Cameron has drawn up secret plans to boost his popularity with an island-based war.

According to the document, members of the prime minister’s local Conservative Association, many of whom are in their seventies, would be parachuted into the unfashionable holiday destination.

Those who survived the drop would seize control of key amenities while wearing green overalls and talking with ‘foreign sounding accents’.

The document states: “In making the case for war, claim that the island could launch an attack on London within two and a half hours, providing the hovercraft and trains are running as advertised.”

Following the declaration of war, Cameron would make Churchillian speeches and be photographed pretending to drive a tank.

Brigadier Tom Logan said: “The ‘battle’ to retake the Isle of Wight would go without a hitch, the loss of half a million conscripts from council estates and Labour voting families notwithstanding.

“A good winnable war for a holiday destination still relatively popular among elderly voters could unite a nation torn apart by fuel and snacks.”

They include ‘bogwash Clegg live on BBC2’, ‘be photographed in a vest with a spanner, fixing an old Datsun’ and ‘sex tape with Rhianna’.