PETS owned by hipsters have expressed anger at being given names that are either jokes or knowing cultural references.

Dalston-based ginger tom David Pusslehoff, whose owner works in digital branding, uses the name ‘Max’ when among other cats.

He said: “My owner sees everything in his life as an opportunity to exercise his vain obsession with individuality. He is 37 and collects Buck Rogers toys.

David Pusslehoff added that he got off lightly compared to other neighbourhood hipster-owned cats called Power Ranger, Sylvia Plath and Kerplunk.

Three-year old Boston terrier Robot Legs said: “While he was high on drugs, one of my owners said I walked like a robot, hence my name. Thanks, fucker.”

He added: “My owners made that advert that’s always on telly. It’s for yoghurt or something. It’s shit.” 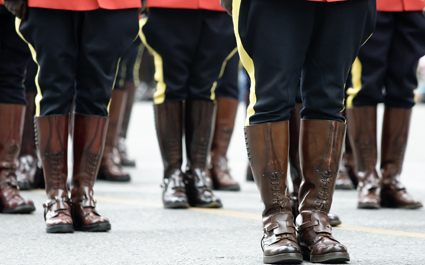 THE man behind a ‘Straight Pride’ parade has conceded that any succession of floats, marching bands and costumed adults is going to look camp.

Martin Bishop, a 38 year-old white, heterosexual male, wanted to show his pride in who he is, despite the overwhelming prejudice he has faced in life.

He said: “First I figured army men would look really heterosexual, but then I started thinking about YMCA.

“Then I envisioned a line of marching footballers, but you’d be surprised how camp a line of men in shorts looks when they’re doing anything other than sport.

“Choosing music was a nightmare. I wanted to go with Whitesnake, but it turns out they’re from the 80s, which is basically camp on a stick.

“Eventually all I was left with Chuck Norris walking down a high-street by himself, holding up an A3 photograph of Brian Clough. That’s not really a parade.”

Bishop is now planning ‘Straight Pride Glass-Fight In a Pub’ but stressed it would just be for ‘tough, muscly guys’.