A HOMESCHOOLED child has realised he is both more intelligent and better educated than his clueless cretin parents.

Julian Cook, aged 14, has been adjusting to distance learning by discovering that his mother and father cannot do simple maths, have read nothing, and thought Hitler was the baddie in both World Wars.

He said: “Dad told me my algebra was wrong because ‘you can’t add letters’. Mum refused to accept that Isaac Newton wasn’t Italian. Neither of them can spell.

“Over the last week I’ve had to gently disabuse them of the idea that Henry I to VIII reigned consecutively, and while I was briefly fooled into thinking Dad had read Emily Brontë he’s only heard the Kate Bush song.

“Then he wanted me to ‘bunk off’ my French revision so we could play football in the garden.

“They know nothing about anything. I never realised I was a prodigy. Or perhaps they’re both just very, very stupid.”

Mum Anna said: “And teachers think education’s difficult. I might switch to full-time home schooling next year so I can get the summer off.”

Raab's in charge: what the acting prime minister can and can't do 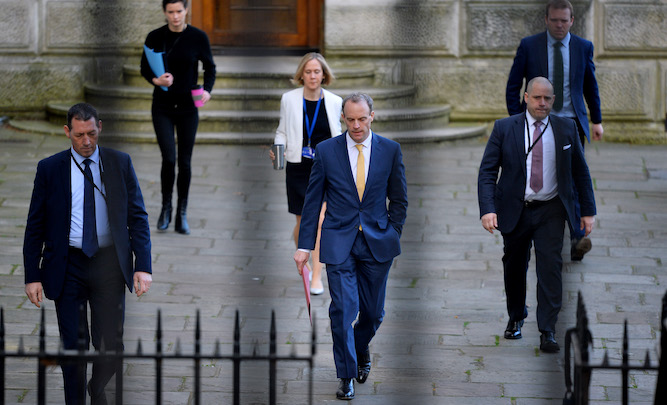 FOREIGN secretary Dominic Raab is officially in charge of the country, but his powers are limited. What can and can’t he do?

The first secretary of state needs cabinet approval to keep Britain in lockdown past next Monday’s deadline, but will almost certainly get it. The only objection will be from Priti Patel demanding it be permanent.

Raab does not have the authority to command Britain’s armed forces to begin a full-scale air and ground war with a foreign power, a limitation discovered within 45 minutes of his appointment when he said ‘Right, now I’m in charge we’re having a war.’

The power to order new green-and-white FIGHTING FOR BRITAIN lanyards is fully Raab’s, and he has wasted no time in exercising it. Furthermore while everyone else’s has white lettering on green, his is green-on-white making him more special.

Despite the backing of everyone else in cabinet, who resent this cocky little upstart the public don’t hate yet just as much as he does, Raab does not have the authority to fire the chancellor and replace him with someone better qualified, eg former Brexit secretary Dominic Raab.

Whitehall has confirmed that yes, black belt Dominic Raab does have the authority to turn his daily press conference into a demonstration of his skill in martial arts. Members of the press will be invited to rush him and he will take them down.

A loophole in Britain’s unwritten constitution allows Raab to launch a single nuclear warhead but only one. The next 72 hours, as he agonises over the perfect target, will be torture for him.