SCHOOLCHILDREN on brain-boosting drugs are questioning the whole point of the education system, it has emerged.

After doubling their IQs with pharmaceuticals, many pupils have completely lost faith in the idea of working hard at school in the vain hope of landing a repetitive office job with some hateful corporation and then handing most of their earnings straight to the government.

Kyle Stephenson, a 13-year-old Reminyl user, said: "My parents' generation worked hard at school, got so-called 'jobs' and slaved for decades to achieve an onerous mortgage, matching stomach ulcers and a deep reservoir of poisonous resentment.

"Therefore I could continue to diligently study oxbow lakes and isoceles triangles in the hope of getting sufficiently decent grades to join them on the soulless hamster wheel of modern life, or I could find a nice tree and sit under it playing the bongos and toying with my genitals.

"Who amongst you would dare to call me 'time-waster?'"

Fifteen year-old Donna Sheridan was predicting five Bs and four Cs before her parents put her on a course of drugs that boosted her IQ to 296.

She said: "My former interests in Twilight and being fingered have been eroded by a growing awareness that humanity is operating on a broken template, the dogged pursuance of which will lead to its unavoidable annihilation.

"Simultaneously I have come to the realisation that most of my teachers have little more than a rudimentary grasp of their supposedly specialist subject, having fallen into their career with a mixture of apathy and grim resignation after their true ambitions were thwarted by misfortune or lack of talent.

"Hence I can't be arsed to go to my French listening test and there's fuck all you can do about it." 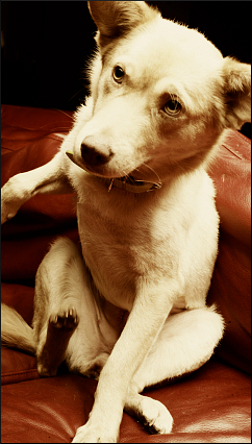 The secret recording of an England team talk was carried out by a group of WAGs desperate to discover why they are having to take antibiotics, it was claimed last night.

FA sources say the covert recording equipment was dayglo pink and made by Prada while the crawlspace above the England dressing room was littered with well-thumbed copies of Grazia and empty Lambrini bottles.

The FA initially feared the bug may have been placed by a rival manager in a bid to to discover England's tactics, but the source added: "Tactics? Very good. Someone has gone to an awful lot of bother just to hear someone say 'knock it to Rooney and hope for the best' in an Italian accent."

But police are now convinced an elite group of lithe footballers' wives and girlfriends are using their cash, leisure time and extensive yoga training to find out exactly why their gussets itch like a scrapyard mongrel.

A senior police source said: "The only one we don't want to talk to at this point is Abigail Clancy. The idea that Peter Crouch has had sex with more than one woman has kept us entertained all afternoon."

The discovery was part of a wider operation following a series of burglaries from bacteriology labs near the plush villages of Oxshott and Alderley Edge.

Police say a batch of stolen test tubes contains scrapings of some of the wealthiest urethras in the UK.

The source added: "If they examine the cultures on those slides, they're going to see a whole bunch of puffy-eyed bacterium with black bands around one of their tentacles.