A LONDONER is desperately attempting to believe that thieves on mopeds stealing your phone were what he moved to the capital for.

Cafe manager Joe Turner has sneered at friends from his Midlands hometown who still just walk down the street using phones like total hicks.

He said: “It’s just part of the whole London vibe; street, edgy, energised by the constant buzz of paranoia whenever you hear an approaching engine.

“Disconnecting and appreciating this amazing city is incredible so the moped dudes are doing everyone a favour. Ducking into doorways has made me so many new friends.

“Who has their phone out these days? People in Nottingham? It’s not worth the sacrifice of living somewhere so awful.

“Those guys probably won’t get pop-up dirty street crime for years. If it even makes it up there.”

In case you were wondering, I’m not a f**king pacifist either, May tells Britain 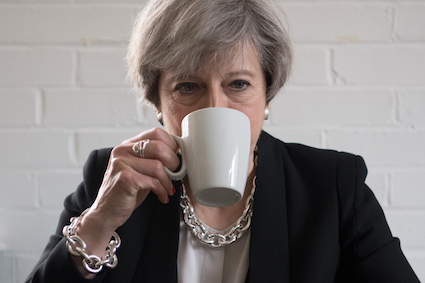 THERESA May has assured Britain that she is absolutely, definitely not a pacifist.

As Labour leader Jeremy Corbyn called for a new approach to military intervention, the prime minister chuckled at the idea of her not wanting to attack people, preferably with her teeth.

She said: “Yes, I’m a biter. But I also enjoy hitting people very hard in the face with a cricket bat or a golf club.

“Obviously I like the blood, but what I really love is the noises they make when I’m hurting them.”

The prime minister added: “It’s really good that I now have an army all to myself. I want to use it to hurt people and I don’t really care who.