A MAN who had only just worked his way through last year’s stockpiled pasta is now wearily heading out to buy another carful.

Tom Logan has spent months diligently munching his way through stockpiled pasta, drinking tea with long-life milk and wiping his arse on a pallet of toilet rolls, and had almost cleared the backlog, but now he has to get more.

He said: “Oh for f**k’s sake. Again? I’d almost cleared enough of the garage to get to my mountain bike.

“I was actually looking forward to just going the shops and picking myself a ready meal for that night again, instead of boiling up yet more fusilli and opening another jar of Ragu. But I can see which way the wind’s blowing.

“So now I’m off down the supermarket to load three trolleys with non-perishable goods again, because this country’s too incompetent to keep supermarket shelves full.

“Once again there’ll be old people going without while I’ll have a year’s supply of flour cluttering up the place. When will it bloody end?”

Logan then sighed, loaded his Volvo estate with bags-for-life, and reversed out of his drive to get to Asda before all those idiot panic-buyers do.

Coronation chicken and other disgusting as f**k sandwich fillings 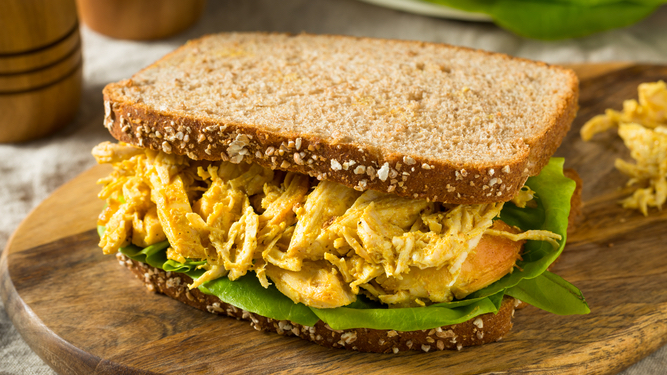 ARE you the kind of freak who loves eating hideous sloppy sandwich fillings when you could just have cheese and ham? Here are some horrors you’ll love.

In 1953 a British cordon bleu chef named Rosemary Hume decided that bits of chicken swimming in a gloopy sea of mayonnaise, sultanas and curry powder was a sane way to celebrate the coronation of Elizabeth II. The fact that people eat it now proves we are still mad as a nation.

Who doesn’t enjoy eating a creamy puree made from a mysterious mix of chemically broken-down fish? People with a normal gag reflex, that’s who. This paste is most beloved of those who were born before the BLT was invented and think two thin slices of white bread slathered in this offensive goop constitutes a decent lunch.

A favourite of railway stations and office shops. A cheese sandwich is fine, so why f**k it up by mixing it into a sludge of microscopically grated cheese and onion and cheap mayonnaise? Aside from being vile to eat it will make your breath stink, especially if you’re at work and the only other thing you’ve been consuming all day is coffee.

The disgusting filling of choice for hipsters who love to be different to the point that they will force down this hideous combination simply because no one else has thought of it. The truth is other people have thought of it, and have rejected it due to the fact that mixing two brown, viscous spreads with wildly opposing taste profiles together makes them want to vomit.

Subway bread contains so much sugar that it can’t legally be defined as bread, so God knows what the rest of the slop they cram between it is made of. You could jam several cheap sausages between two slices of Battenberg and the result would be tastier and more nutritionally balanced.