A MAN who supports grammar schools and other forms of competition in life is unaware he would fail spectacularly under those arrangements.

Office administrator Martin Bishop believes competition is always good due to overestimating his ability to compete with people who have more social advantages or are simply cleverer than him.

Bishop said: “I’m strongly in favour of grammar schools because they help bright kids to excel and talking like that makes me sound tough and successful.

“I didn’t do brilliantly at school but if there had been grammar schools then I would definitely have gone to one because 11-year-old me would have worked really hard and got in easily.

“Life’s all about competing, like how I got the last Twix out of the snack machine this morning because I ran into the canteen while others walked.

“I’m looking at my next career move now. There should be plenty of opportunities for a competitive guy like me, although I’m a bit concerned my only interview so far is with the Tile Mega-Warehouse in Swansea.”

Bishop is now considering competing “on his own terms” by starting a business that either sells owl-themed table lamps or does ‘viral marketing’.

But there was, you know, says Samantha Cameron reassuringly 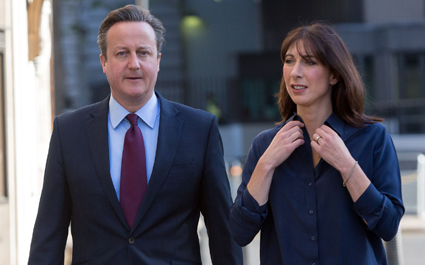 SAMANTHA Cameron is struggling to reassure her husband that he did a great job and everyone does not hate him.

After quitting as an MP, David Cameron lay with his head in his wife’s lap and asked her what she thought his greatest achievements were.

David Cameron said: “Try to be a bit more specific. I know deep down that I’m great but sometimes I think that almost everyone else in the country reckons I am a giant arse.

“Or, worse, that they see me as indistinguishable from hundreds of other ruddy-cheeked alpha male toffs and thus no more memorable than a mid-morning packet of crisps.

“So let’s focus on the positives. What went really well?”

Samantha Cameron replied: “Um. Gosh I don’t know, there’s such a choice, it’s like trying to name your favourite chocolate in a box of Roses.”

David Cameron said: “That’s easy, it’s the toffees. We both know I like the toffees and you like the swirly hazelnut ones.

“I properly fucked it up didn’t it?”