A MAN who wore a pair of glittery leggings at a festival thinks he’s a daring gender pioneer rather than a stereotypical arse.

Stephen Malley, 31, is still talking about how ‘amazing and free’ he felt after wearing the leggings for an afternoon when he had drunk two pints and smoked some of a spliff.

Malley said: “I felt like I was a radical outlaw flirting with the fringes of society, even though I paid £230 to get into the festival and I was pleased to note that the security was excellent.

“Wearing the leggings was my way of expressing my feminine side and showing that I can break free of the constraints placed on me by my gender. Even if I’m not really sure what those constraints are.”

Malley’s friend Martin Bishop said: “75 per cent of the men at the festival were in leggings and they all thought they looked as confident as Eddie Izzard, despite being painfully self-conscious about their knobs showing.

“Steve just wanted this girl to think he was all wild and crazy so she’d sleep with him. Which worked for a while but he put his trousers and a fleece back on at 9pm because he said it was ‘nippy’.”

David Davis to negotiate Brexit by pretending to be deaf 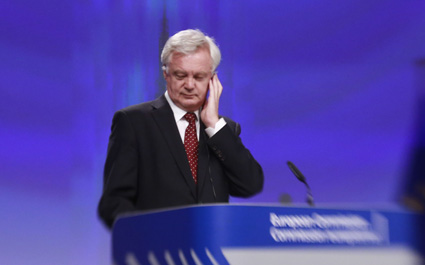 DAVID Davis is to get through the next round of Brexit negotiations by cupping his hand to his ear and pretending he is unable to hear.

A government spokesman said: “It’s becoming increasingly obvious to Michel Barnier that we haven’t got a fucking clue, so rather than dig ourselves a deeper hole by talking more, David Davis is just going to pretend he can’t hear what is being said.

“You know when you ask your nan if you can watch something other than Flog It for five minutes and she pretends she can’t understand the question? Like that.

“Each round of talks only lasts a few days, so we reckon we can get through the next one at least before Barnier’s manners crumble and he calls David Davis a cloth-eared twat, or whatever they would say in Paris talk.

“And our strategy after that? Not sure. We’ve already tried crossing our fingers and that didn’t work so your guess is as good as mine.”