Money and objects to remain important

MONEY and the objects that can be purchased with it will continue to be everyone’s top priority, it has been confirmed.

In the wake of the Budget, economists said that for at least two years everyone will fret about maintaining their current level of money and things until living standards rise and everyone can return to fretting about how much money and things they have compared to other people.

Helen Archer, from Hatfield, said: “In a way it’ll be a relief to just focus on continually counting my own objects for a couple of years.

“I think every once in a while it’s good for us as individuals to step back and become even more pathologically materialistic and self-absorbed.”

Tom Logan, from Finsbury Park, said: “The weather has been just lovely this week which has given me the chance to laze around in the park comparing funky bluetooth headphone prices on my iPad.

“I think sometimes we forget just how good it is to stare at screens while surrounded by nature.”

Meanwhile, as millions of people use their smartphones to look up the word ‘austerity’, the Daily Mash presents a simple guide to saving the thing you’d realise you don’t need anywhere near as much of if your brain wasn’t so consistently full of shit.

Cancel your gym membership
Being a member of a gym is sociopathic. Stop it, you vain, obsessive weirdo.

Take a packed lunch
Everyone knows that home-made sandwiches taste better. How could they not? Why would we even allow Marks and Spencers to sell us sandwiches in the first place? What in the name of God is wrong with us? Save money by scavenging some old Tupperware from the local tip and getting up three and a half minutes earlier.

Brew your own beer and wine
Risky, because you might die, but being poisoned is surely preferable to funding yet another fucking Guinness advert that thinks it’s a work of art. Also, your house is open 24 hours a day and you won’t get your head kicked in for giving yourself a dirty look. Even then, being so drunk on home-made Chardonnay that you actually beat yourself up has got to be more entertaining than yet another pitifully competitive quiz night at the Dog and Wii.

Grow your own vegetables
Admittedly difficult if you live in a flat, but there is no reason why you shouldn’t set aside a corner of your living room for breeding delicious parrots.

Read a book
Secondhand books cost 20p and 98% of them are better than anything that has ever been or ever will be on television. Then again, perhaps you derive entertainment from playing video games like some little child who still pees the bed and is about as attractive to women as a gynaecological spatula.

Shut your fucking face
Instead of complaining about how you can no longer afford the gym, a pretend sandwich, a few drinks after work or a Sky subscription, why not try shutting your ghastly fucking hole for five minutes? 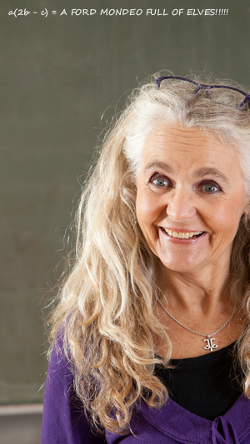 BRITAIN’S maths teachers are freaks, it has emerged.

New research by the Institute for Studies has found that not a single one of them is properly right in the head and they are all odd in completely different ways.

Professor Henry Brubaker said: “It has been said that people become teachers when they have, on some level, failed as a human.

“In the case of maths teacher, it is more because they have failed to be human.

“If these people didn’t have an overhead projector and some quadratic equations, they’d either be in a windowless cellar setting fire to their chest hair or doing something unspeakable on a bus.”

Professor Brubaker cited the example of Mrs Ellis, who recently told her class that she was once married to Daley Thompson, and that one of her 43 cats is the current incarnation of the actor Roger Vaughn, who isn’t even dead.

He said: “She banned Helix Shatterproof rulers in her classroom because she reckons they contain ghosts.

“And she told a group of 13 year-olds that she got daisy-chained by Mott the Hoople when she was glam rock editor for the Sunday Express.”

He added: “Another example is Mr Malley, who collects golliwogs and has a draggy leg that he says is from an injury in Vietnam.

“He invited some female pupils to his council house after school, and paid them £5 each to paint their faces ochre while he sat in the bath wearing an oxygen mask.

“And that, I can assure you, is the tip of the iceberg.”