Barrow Wake, near Stroud in Gloucestershire, was first used for copulation during the Bronze Age, when travellers would attach maroon-coloured rags to their carts as an indication that they were looking for a casual hump.

It reached its peak in the early 19th Century and was even mentioned in Jane Austen’s Mansfield Park when Fanny Price explains that her muddy knees and squinty bonnet are the result of ‘a jaunty bout of Frenchman’s intercourse upon the Barrow Wake, with Mr Deakins, a magistrate’.

Its popularity waned due to underinvestment and television and by the 1980s it was reduced to nothing more than a beautiful spot for a picnic or a Sunday afternoon hand job.

But thanks to a National Trust takeover, Barrow Wake has been relaunched as an interactive fuck-park with antique condom displays and a cafe serving ‘hot drinks’ and locally-made chocolate fancies that look just like a black man’s penis.

“There’s plenty of used condoms around the site so children can have a ‘treasure hunt’, and hidden speakers mean you are never more than two yards away from the sound of someone ejaculating.”

He added: “Visitors don’t have to engage in sex with strangers but if they do feel the urge to be taken roughly up the dirt box they will have an excellent view of the Malverns.”

Grade-four dogger, Martin Bishop, said: “It’s great how you can learn something about history while getting noshed off by a sad-eyed Gloucester housewife with split ends.

“My only complaint is that you have to go through the shop to get out, which is a bit cheeky. However I did purchase a charming snow globe showing a miniature gang-bang in the back of a Ford Transit. Mother will love it.” 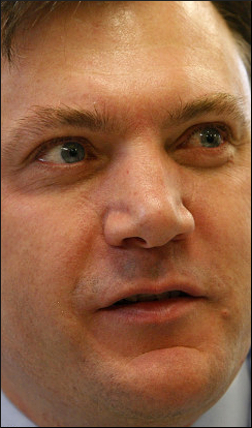 BRITAIN will today once again cast its vote guided by a series
of worthless opinions with no basis in fact.

As the polling stations open, stunningly ill-informed voters across the country are preparing to support a party manifesto that bears little or no relation to the fantasy world that exists inside their brains.

Helen Archer, from York, said: “I’m voting Lib Dem because I hate black people and after all these wasted years of the two old parties we finally have the chance to hate black people differently. Nick Clegg has a nice chin.”

Roy Hobbs, from Darlington, said: “I’m voting Labour because of the gypsies. There’s gypsies everywhere these days. Adrian Chiles is a gypsy. So is that Michael Caine. I’m standing on some gypsies right now.”

Meanwhile, in what is expected to be tightest election result in years, the Queen has warned Gordon Brown that if he turns up 9am tomorrow morning expecting to be made prime minister, a Grenadier Guardsman will drop him like a sack of carrots.

The Daily Mash guide to the post-election landscape:

1. The Conservatives win a majority. The TV is filled with lots pissed people called ‘Ollie’ who work for George Osborne looking incredibly red faced and pleased with themselves. By 2am Britain is already beginning to regret this. At 4am a gang of champagne-soaked Ollies charge out of party HQ and give a Clockwork-Orange style kicking to the nearest binman.

2. The Conservatives are the largest party with the most votes but just short of an overall majority. David Cameron becomes prime minister after doing a deal with Peter Robinson’s Democratic Unionist Party. The UK government is now held in place by a fundamentalist Christian who makes Jerry Falwell look like Graham Norton. Oops!

3. The Conservatives are well short of an overall majority and forced to do a deal with the Lib Dems. Nick Clegg will be on telly a lot. You will eventually realise what an unmitigated charlatan he is. Meanwhile Vince Cable gives half your money to a Chinaman and uses the rest to buy a series of tiny chocolate windfarms.

ED BALLS WILL BE PRIME MINISTER.

5. Labour wins an overall majority because Gordon Brown is a good man who just gets angry somtimes, but you tell all your friends that this time it’s going to be different and they nod and smile and touch your arm, but eventually they stop inviting you for coffee and one day they pick-up the paper and just shake their heads when they read how your body was found under a patio.