Seven reasons why 1970s Christmases were the greatest

YULETIDEOLOGISTS have long agreed that 70s Christmases were the best. This judgement by men in their late 50s is objective fact. Here’s why:

Beats Cherry B and Watney’s Party Seven because this Dutch alcoholic custard was the tipple that told you that the festive season was here. Anything even slightly continental was exotic then. Also, washed away the taste of the rank wine you drank at morning Mass.

Before kids went soft with their Space Invaders, Crossfire was the most wished for and cherished Christmas present. You fired ball-bearings into your opponents’ goal with plastic guns, the excitement making you forget the agony of the blisters on your forefingers at least some of the time.

This was the golden age of light entertainment. A Merry Morning With Jimmy Tarbuck, Jim Davidson’s Boxing Day Laugh-In, The Reg Varney Hour and a specially extended Christmas Crossroads in which Meg and the staff let their hair down. All ringed with your trusty felt tip so that you didn’t miss any of the fun. No ITV though, because you had to buy a separate magazine for that.

Games of Monopoly that went on until everyone passed out

These were the years before Britons developed Thatcherite ruthlessness and families were content to go round the board like London tourists without bothering to build up property portfolios to crush their opponents. By 4.15pm everyone was asleep, waking up five hours later for a boiled egg sandwich.

We were more modest in the 1970s, not given to outlandish coloured light displays. We held the steps while Mother went up to the loft for a cardboard box of red and green paper links, held them again while she pinned them up in the living room, job done, break out the Quality Street.

Tins of Quality Street were massive

They were actual tin and they contained five pounds of chocolate. Small children could drown in them. Opened well before Christmas, they were still going at the end of January. Today’s tubs are shallow, plastic puddles.

Cracking walnuts wishing they were David Cassidy’s testicles and turning as crimson as a paper crown at The Sweet, your Grandfather’s fury at the parade of glammed up longhairs was a festive highlight. ‘I’ll give him My Coo Ca Choo! He wears frilly knickers and a bra and all!’ 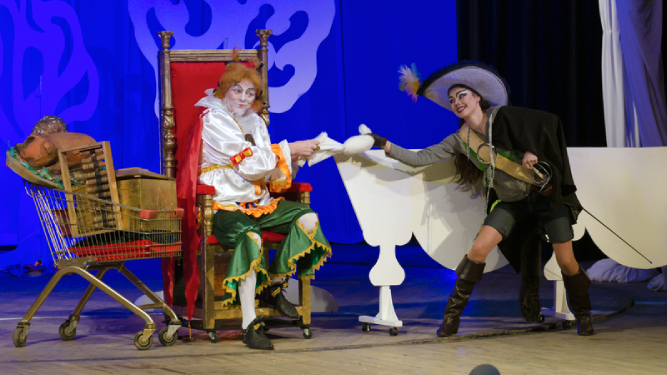 THEIR very existence and ability to draw in huge crowds is confusing enough, but these pantomime plot holes make even less sense:

Even the most half-witted child would be able to tell that their grandmother has been replaced by a wolf dressed in her clothes and glasses. And are audiences expected to believe that granny emerges from the wolf’s stomach unscathed? Bollocks. In real life she’d have been reduced to a mauled, bloody acid-dissolved pulp.

If this play was even remotely true to life then Puss would wake his owner up at 5am by losing its shit and trashing the furniture, before jumping on their bed and clawing their face off. This would be followed by a second half where the hero snoozes on a windowsill before waking up to lick its own bum clean. You’d still need a buxom wench character to keep the dads entertained though.

The glass slipper isn’t the most ridiculous concept in this story. Even though if Cinderella so much as stubs her toe then she’ll need to make a trip to A&E to get the shards removed. No, the bigger plot hole is that apparently no other girls in the kingdom has the same foot size as her. Are we meant to believe she’s trampling around in size 15 shoes like a freak?

Everyone knows that gold is one of the heaviest metals. So if a goose was laying golden eggs then her back end would collapse with the weight of it. At the very least she’d have suffered a massive abdominal hernia. This grim adherence to realism might not translate to ticket sales though, so perhaps it’s best overlooked.

Dwarven diamond miners wouldn’t be living in a ramshackle house in the woods. They’d be living in a huge mansion, dancing with strippers and snorting lines of coke off their stomachs. Their names would have to be more accurate too, something along the lines of Probably Owns Slaves and Destabilising The Local Economy.

As anyone middle-aged knows, once you reach your 40s you need to wake up and go to the toilet at least once a night. Twice if you’ve had anything to drink after 5pm. Sleeping Beauty was a teenager when she went to sleep for a century, so after about 25 years of undisturbed slumber she’d be dozing in a bed reeking of piss and shit.