TEENAGE girls who have sex before they are old enough to have a library card are a victim of their DNA, it was claimed last night.

Researchers say the 'Colchester2043' gene was prevalent in every test subject found naked under a pile of coats at a school disco.

According to experts Colchester2043 looks like a pair of hoop earrings surrounding a bottle of WKD. It is also a recessive gene whose phenotypic characteristic expresses itself via the wearing lingerie for a night out in mid-February.

Professor Julian Cook said: "This clearly plays a role in early sexual development, even though most teenagers are like muskrats dipped in pheromones and would dry-hump a pile of bricks."

Cook believes gene therapy could help carriers of Colchester2043 and has called for extra funding for experimental knee-stapling and the staged withdrawal of skanks from McDonalds car parks.

But Gemma Hollis, Sheffield's reigning under-16 Skank of the Year, said she always knew her sexual impulses were beyond her control, before cleaning her trap with a KFC handwipe and arranging her next bout of intercourse via text message.

She added: "So, am I getting paid for talking to you? Give us a tenner and I'll throw in a Reverse Dutch Steamboat as well."

Dinner Ladies To Be Installed In All UK Homes 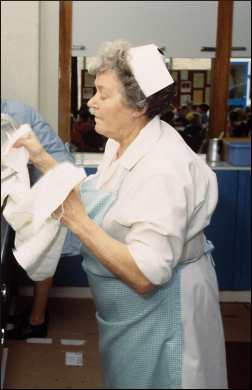 FOUL-tempered old women with massively thick limbs are to be installed in British homes in a government move to limit food wastage.

The dinner ladies will ensure that no one leaves the table until they have cleared their plates, even if it takes forever.

Household members who refuse to comply will have their nostrils pinched shut and the food forced down their throats, and it will not make the least bit of difference if they cry.

A department of waste spokesman said: "No-one is paying any attention so we arranged a meeting with Mrs Moss, the Queen of the Dinner Ladies – if you kill her they all die – and agreed for a national dispersal of her thousands of wobbly-armed troops."

Dinner ladies are known for their lack of pity and immense physical strength. They do not have Christian names, wear dresses made of dishcloth and are the scientific opposite of lollipop ladies.

Plumber Roy Hobbs, one of the first UK householders to be fitted with a dinner lady, said: "Mrs Grice is huge, has a face like rutting scorpions and smells of disinfectant.

"Last night my wife couldn't finish her quiche, so Mrs Grice grabbed her hand and said she had a choice between eating it or her own fingers. Then she dumped this Eve's pudding in the middle of the table that was so heavy the legs collpased and then she forced us all to eat it off the floor like pigs."

He added: "Mrs Grice sleeps under the sink with one eye open, all curled up like a snake, and never ever goes to the toilet.

"Once she cut herself on a fork and her black blood burned through the kitchen lino. We're all incrediby scared."