Students reminded their degrees have no actual value

NEW graduates have been told that their degree certificate is only valuable in a figurative sense.

To prevent any misunderstandings, universities have clarified that their honours have no direct relationship to the real world and cannot be traded in for jobs, internships or groceries.

University vice principal Denys Finch-Hatton said: “A degree is hugely important to any young man or woman because they get to wear some robes and have their name read out from a list.

“But it saddens that graduates  believe their degree certificates will gain them respect outside the academic world or can be exchanged for multipacks of Cup-a-Soup.

“That’s why we print on the bottom in small print that it has a cash value of 0.01p.”

Graduate Tom Logan said: “My degree in broadcast journalism from the University of Lincoln means everything to me, but I have to admit that I’d swap it for a decent job, or any kind of job.

“I’d actually swap it for baked beans on toast.” 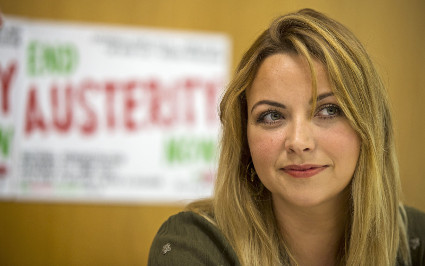 KIM Jong-un has admitted that all he can think about is Charlotte Church.

As the Voice of an Angel star called for a 70 percent tax rate, the North Korean dictator declared her to be the ‘Great Successor’s Bride of Promise’ and ‘Star of All the Heavens’.

Kim said: “I have always known Charlotte is the one, ever since I saw a quintuple rainbow and a meteor shower as she sang Pie Jesu on This Morning.

“She embodies the principles of self-reliance, created by the Great Leader and her chat show was not the disaster everyone said it was, apart from that one episode with Jonathan Ross.

“As she moves away from the corrupt husk of capitalism towards the glorious communism that is her birthright, my heart swells with joy at the thought of our blessed union to be.

“I hope she likes inspecting factories. Ah, who doesn’t?”

Church said: “State control of all media, with scurrilous rumours punished by execution?