A SUPERMARKET queue is becoming unbearably tense due to a shortage of dividers.

Shoppers at an Asda in Knutsford are watching the till operator intently in order to grab a Toblerone-shaped plastic divider the moment one becomes available.

Office worker Tom Logan said: “I can’t relax until my shopping is demarcated with a little barrier standing there like a medieval town guard.

“I’m praying I get a divider soon because if my items bounce on the conveyor and get too close to the woman in front’s I might have to reach out and move them apart slightly.”

Mum-of-two Donna Sheridan said: “If my shopping gets mixed up with the first few items belonging to the man behind me I’d have to buy them, because there’s no way a computerised scanning system would just let you delete something.

“He might think I was stealing his shopping and call the police. Then I’d have some waffles and courgettes I didn’t want and a criminal record.

“Probably I would lose my kids, spiral into an underworld existence and have to join a female biker gang called ‘the Razor Bitches’.”

Checkout operator Nikki Hollis said: “I particularly like it when someone puts a divider behind their shopping, which is basically telling the person after them to stay the fuck away from their granola.” 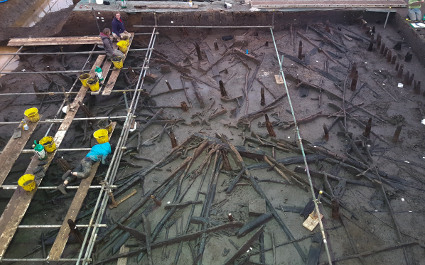 THE residents of a Bronze Age village were bitterly opposed to Iron Age migrants from Europe, archaeologists have found.

The settlement in Cambridgeshire, which had been buried for 3,000 years, was discovered when the tops of crude protest signs were spotted above layers of mud.

Archaeologist Helen Archer said: “The signs, which include ‘Any old iron? NO THANKS,’ and ‘IRON? IR NO,’ a primitive attempt at wordplay, show that the residents were up in arms about climate-based migration patterns.

“They believed there was nothing wrong with good old bronze, that immigrants would fail to understand their rich megalithic culture and that they should all be sent back where they came from, and further.

“Tragically, the whole village was burned down by a faulty bronze smelting furnace.”