A TEACHER who kept her temper with an outstandingly horrible adolescent girl for a full year has been rewarded with a £3 box of Maltesers.

Joanna Kramer has endured constant provocation from 14-year-old Nikki Hollis since last September and has now been thanked with a gift worth less than a babysitter gets per hour.

Kramer said: “No reward would be adequate for dealing with Nikki. But some rewards are more inadequate than others.

“She snipes, she mutters, she connives, she disrupts and to top it all she’s thick as pigshit. So thank you, Nikki’s parents, for a small box of spherical chocolate.

“When Josh’s mother gave me a bottle of Prosecco at least she acknowledged the numerous weeknights I’ve been driven to drink by his totally incomprehensible homework.

“But Nikki? A £40 bouquet would barely recognise what a saint I’ve been. That bitchy remark about my ‘granny hair’ was worth a bottle of vodka alone.”

Hollis’s father Dan said: “Look, if everyone’s getting compensation for how dreadful Nikki is I’m in line for millions.”

How to have a brilliant DIY funeral 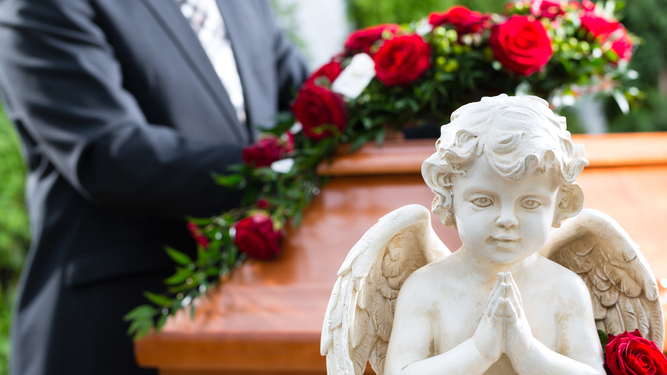 MORE and more people are choosing ‘DIY’ funerals which are cheap but just as much fun as proper ones. Read our guide to burying yourself or loved ones on a budget.

Alternatives to a coffin

Let’s face it, coffins are expensive for something you’ll only use once.

Instead of an overpriced funeral company one, use the cardboard box your washing machine came in. You might have to jiggle the limbs around a bit, but at least it’s biodegradable.

Alternatively use an old Ikea wardrobe that’s falling apart. If the deceased loved mooching around Ikea buying tea lights, what a great way to go!

Alternatives to a vicar

Vicars are a piss-poor investment for funerals, because they rarely know the deceased and rely on sketchy notes from the next-of-kin, resulting in bizarre eulogies like:

“Jeff loved cycling. His life was a joyous whirlwind of 12-speed gears and puncture kits. That was Jeff, truly a man of bikes.”

Instead get a fancy dress vicar costume off Amazon for £8 and do it yourself. And once the grief and sadness has passed you’ll have a great outfit for parties!

Alternatives to a graveyard

Yes, graveyards are tranquil and respectful places for the deceased, but they cost a bomb. Cheaper places to dispose of a body include:

● The canal. Thousands of serial killers can’t be wrong!

● The local rubbish dump. The council jobsworths won’t mind so long as you don’t leave Auntie Sylvia in the battery recycling crate.

● Under the patio – a lovely touch for deceased Anna Friel or Brookside fans.

Alternatives to a wake

Traditionally held in a pub, but if you’re footing the bar bill that’s going to be grief of a different kind. Instead hold it in a local park with a few slabs of Foster’s. Take a frisbee to lighten the mood.