The arguments for and against rail strikes

ARE train drivers right to strike, or are they just in a mood?

As Southern rail enters its second day of strikes, drivers claim they are protesting safety risks caused by staff cutbacks, whereas bosses say they should just stop moaning and open the fucking doors.

Do you agree with the strikes? Here are both sides of the argument.

Train companies obviously bastards so it’s good to see them suffer, even if I am suffering more.

I support anything that prevents me getting to work.

Train conductor once found me hiding in disabled toilet without a ticket but let me off.

I must be kept safe at all times, like a special jewel, even if I basically do nothing but eat food and watch telly.

It’s good to have a new social group to hate.

Could meet sexy woman/man on crowded train platform then whisk them away for an all-day breakfast at nearby ‘Sky banner’ pub.

Public servants are supposed to be fat and jolly, or ideally some sort of cartoon dogs like out of those ‘Busy Town’ kids’ books.

If I’m too scared to stand up to my boss, they should be too.

They have too many unions with confusing names but annoyingly there isn’t one called BUMCLEF.

I wanted to be a train driver but now I work in this hateful office so they should count their fucking chickens. 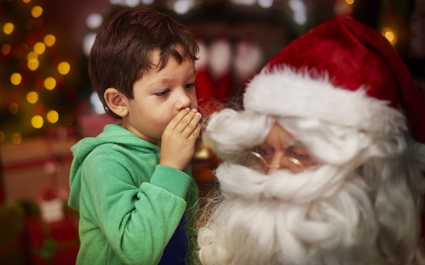 A FATHER Christmas in Preston has informed children that they are getting ‘sod all’ because they have been ‘bad little buggers’.

The Santa, whose grotto is in a shopping centre next to the disabled toilets, was exposed when a Southern seven-year-old visiting relatives was given the choice of a ‘clip round the ear’ or ‘shite in a bag’ for his grotto gift.

Carolyn Ryan of Kingston upon Thames said: “Archie went in all smiles, ready to ask for the PS4 with virtual reality headset that he’s decided he’d like this year.

“But he came out weeping, saying that Father Christmas had told him he was a ‘soft get’, that his Christmas dinner would be ‘shit with sugar on’, and that he’d be getting ‘nowt but a tangerine and be bloody glad for it’.

“We’ve had to take our Christmas tree down. It brings on his PTSD.”

Brother-in-law Alan Ryan of Preston said: “So wait, down south Santa Claus gives kids presents they’d like and isn’t allowed to use foul language or violence?

“Tragic. They’re losing out on that marvellous moment when they find out he’s not real.”