AS the parent of a toddler, do you feel your little angel can do no wrong? Here are some great ways of convincing people your child is not the embodiment of evil.

Josh called you a ‘poohead’, you say? He put your phone down the toilet? He tried to hunt your dog with a homemade spear? He’s just tired. (It’s probably best not to mention that two-hour nap he just had.)

Try saying things like: “It may look like he just kicked you in the bollocks, but actually he’s testing boundaries. He knows he shouldn’t do it now, and your bollocks helped with that. Good for you.”

Say: “I’m so sorry my child shat in your shoe – it’s the terrible twos!” For best results accompany this with a helpless shrug and look like you’re on the verge of tears. People will immediately sympathise – and the great thing is you can use this excuse for a whole year!

“She only tried to gouge your eye out with a plastic fork because she hasn’t eaten for six minutes!”. She’s definitely not already exhibiting psychopathic tendencies. No. Although she is attempting to decapitate her toy Mickey Mouse.

… or a leap, or a growth spurt or fuck knows what but it’s definitely not your kid’s fault.

Claim they are ill

“He’s only wrecking your house because he’s coming down with something. He’ll crash out when we get home.” Hope that no one notices your child looks fit as a fiddle as he rushes around energetically trying to put the cat in the oven.

I f**king love it, says Rees-Mogg 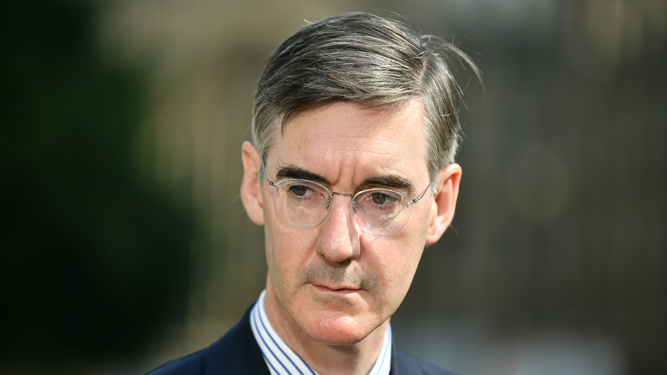 JACOB Rees-Mogg has called a press conference to say he has read the draft Brexit agreement and, against all expectations, absolutely loves it.

The MP for North East Somerset admitted he began reading the draft expecting a traitorous document worse than giving commoners the vote, but soon found himself totally blown away.

He said: “Have you read it? Just fucking read it. It’s amazing.

“From page one you’re gripped, a hundred pages in and you’re cancelling your plans for the night. As for the emotional punch on page 585 – wow. It’s better than Bravo Two Zero or Stephen King’s It.

“I’m deeply sorry about all that nonsense I’ve been spewing for months. This is the Brexit agreement par excellence. The backstop is a work of art. Please, Theresa, publish a sequel!

“I and the rest of my European Research Group will be backing this rowdy boy to the hilt. It’ll sail through parliament like Nelson on HMS Victory. I daresay I’ll salute.”

Theresa May responded: “This is a welcome development but he’s still a pair of glasses drawn on a bean.”