TWITTER’S ‘Vine’ app means everyone will now be famous for just six seconds.

The software allows users to demonstrate the contents of their brains in a six second loop, allowing most people enough time to play their clip twice.

Twitterologist Roy Hobbs said: “Everyone will now have their own moving epitaph, the majority of them with their gristle hanging out.

“So when the Earth finally discovers the vaccine for humanity, at least everyone will have been famous for the time to takes to say ‘hi, my name is Emma and I think homeopathy really works’.”

Hobbs added: “I did wonder what Andy Warhol would have made of this, but then I remembered that he was just some arse who coloured-in a few photographs.”

The rapid deflation of fame has continued since the middle ages when the global population was 250 million and everybody was famous in their village for an entire day before being set on fire.

The Vine app was named after The Vines who were vaguely recognisable for six seconds in 2002 and was launched with a clip of the group outside a Sydney bus station, pleading for spare change.

America to send monkey-riding-a-dog into space 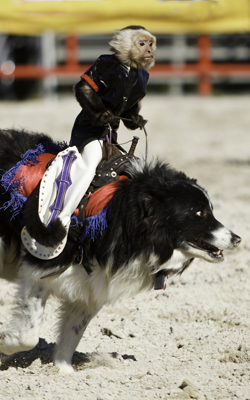 THE US is to send a monkey strapped to a dog on a space mission, it has emerged.

Following Iran’s claims to have sent a monkey into orbit, president Obama said he is determined that the US leads the world in entertaining, morally dubious animal space travel.

The monkey-on-dog astronaut team will consist of a three-year-old collie called Heston and Peanut, a Capuchin monkey wearing a cowboy hat and a leather jacket with the American flag on its back.

The duo will travel in a specially designed rocket with the control room and feeding area connected by an assault course featuring jumps, tunnels and a little castle with a moat.

A NASA spokesman said: “There’s not much point in having a monkey on a dog unless you get them to run around a bit.

“Also this is important research into how zero gravity affects a collie’s ability to complete a mini-equestrian course with a monkey dressed as a cowboy on its back.”

However animal rights campaigners have responded angrily to the project, producing a list of 498 ways in which it is against nature.

American Tom Booker said: “My worry is that Iran will retaliate with something even more spectacular, for example a spaceship containing a really good flea circus with a gecko ringmaster.

“With the economy being how it is, I’m not sure we should risk an increasingly flamboyant novelty-based animal space race.”