We’ve been hurt so bad before, voters tell polls

THE UK electorate wants to trust but is still carrying emotional baggage from its bad experiences with polls in the past, it has admitted.

Voters confessed that though they find polls showing the Conservatives losing ground incredibly attractive, they have been hurt too many times to allow themselves to hope.

Emma Bradshaw of Chester said: “It’s not fair to tar them all with the same brush, but I’ve had my heart broken in the past by lying, two-faced polls and I can’t let it happen again.

“I said that after 2015, then only last summer I was seduced by Brexit polls that told me everything would be okay, but brutally stamped all over my feelings just as I was starting to think there might be a future.

“I was devastated but didn’t learn my lesson and threw myself into the arms of the American presidential election polls, which seemed so reliable but turned out to be the same as all the rest.

“I swore off polls for a while but these new ones are just so bloody sexy that I want to believe all of their whispered promises. I want to hope again.

“And who knows? Maybe this poll is The One.”

Trump pulls out of 21st century 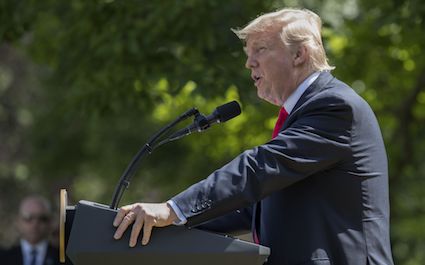 DONALD Trump has pulled the US out of the liberal consensus of having a ‘2’ at the beginning of the year.

The president has announced that there is no evidence for the ‘chronological conspiracy’ that time moves forward, and that it runs counter to his aim of making America great again.

“People – losers, haters, really horrible people – say those ‘19’ days are over. That they’re in the past. That this whole ‘20’ thing that they have going on now is how it has to be.

“Well, we have the best scientists on earth here in America, really tremendous. And let me tell you, they’re gonna turn this thing around so fast it’ll make your head spin. Believe me.”