Woman 'only drinks champagne' because she's a nightmare when pissed

A WOMAN who acts like a sophisticated occasional drinker only does it because alcohol turns her into a raging psychopath, it has emerged.

Office manager Emma Bradford’s preference for champagne is due to her being unable to drink normally without starting some kind of confrontation.

Friend Nikki Hollis said: “Emma only limits herself to a couple of glasses of champagne on rare occasions because otherwise her eye goes wonky and she starts coming on to really old men.

“I think she’s got a low alcohol tolerance and some psychological issues, because I’m pretty sure normal people don’t punch a mirror in the toilets ‘to see what happens’ after four glasses of chardonnay.

“Ironically everyone thinks she’s really classy and always in control, which are not the terms I’d have used years ago at a party when she was dancing with sick on her leg.”

Bradford said: “I love champagne because you never drink so much of it you wake up realising you’ve keyed loads of cars at a wedding reception, which is obviously just a hypothetical example I made up.” 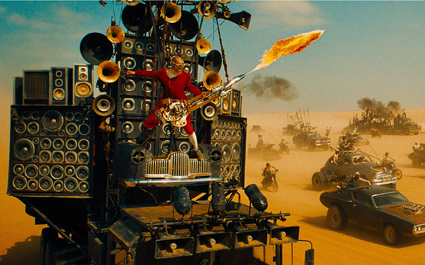 THE mutant guitarist from Mad Max: Fury Road has become the latest musician to reject an offer to perform at Donald Trump’s inauguration.

The Doof Warrior has said that despite a huge cash offer from the Republican Party he just didn’t see how he could morally do it.

He said: “Being part of Immortan Joe’s road militia could be seen as quite a right-wing thing to do for any musician, but I’ve got to draw the line somewhere.

“I’d rather continue to prowl the desert wasteland, looking for vulnerable travellers to run off the road with our weaponised vehicles as part of a desperate struggle to survive.

“Which is what you will be doing in a few years’ time.”

A Trump insider said: “We are thinking about putting up a sign that says ‘X Factor auditions this way..’ and when the hopeful singers walk out on stage they’ll be singing at the inauguration. That could be seen as underhanded, which it is and you’d better get used to it.

“Either that or we’ll just get Metallica.”