AIRLINES are to lift the ban on KY and other proprietary sex lubricants, under new security regulations introduced today.

Under the simplified regime passengers will also be allowed to take two bags into the cabin at all airports except the ones where they can't.

Meanwhile the limit on the number of beards who can travel together has been increased from two to four.

Tom Logan, spokesman for the British Airports Authority, said: "These new rules are so simple and straightforward that anyone who can't remember them must be a terrorist.

"People flying from Heathrow can take two bags, but if they land with both of them at any other airport they will be pinned down and shot in the face."

EasyJet is allowing two bags, but the extra bag will be thrown out in mid-air and collected, hopefully, by an old bus somewhere along the route.

Logan added: "The bus will then deliver all those bags that are still remotely intact, although we do expect delays of up to 12 hours."

Ryanair will accept two pieces of hand luggage, but passengers will have to allow chief executive Michael O'Leary to punch them in the face.

Mr Logan said that bearded, olive-skinned men who jibber-jabber in a threatening manner had nothing to fear from the new regulations.

"As long as they don't mind having big Andy in them, right up to the elbow," he added. "And this year he has promised to take off his watch."

Everything To Become Smaller And More Expensive, Says Gates 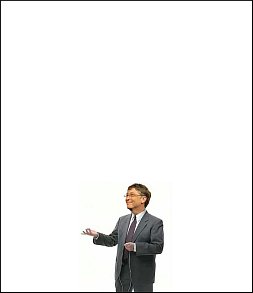 IN five years time everything you buy will be much smaller and cost a great deal more money, Microsoft chairman Bill Gates has confirmed.

Gates said consumers were furious about the size of their electronic devices and that he had received hundreds of death threats from people unable to put all of their possessions in one very small drawer.

Speaking at the Consumer Electronics Show in Las Vegas, Gates said: "People are leading smaller lives. They are having smaller experiences and thinking smaller thoughts.

"Against the backdrop of this context, we must be constantly evolving our user interface technologies, or 'things'."

Highlights at the show include a holographic chess game featuring the stars of Grey's Anatomy, a 50ft hight plasma screen TV that is programmed to kill, and a Japanese man who has replaced all of his teeth with tiny iPods.

Gates added: "Microsoft and our commercial partners will strive to make your life smaller and smaller until you can fit all the constituent parts into your child's mouth."

But Wayne Hayes, deputy director at the Institute for Consumers, said: "That's just so much cock.

"These corporations employ dozens of spectacularly awful people to work out how much they can save in raw materials by making things half their current size.

"They then wheel out Bill Gates and Steve Jobs to convince you that this is what you actually wanted all along. You then buy these tiny things for stupid amounts of money, like the arseholes they know you are.

"Before you know it Bill Gates is wanking over yet more Da Vinci sketches, meanwhile at Apple it's swan burgers all round. Fuckers."