WAR is perfect for soothing away the niggling aches and strains of modern life, the British Army said last night.

Major General Charles Stanley, head of guns at the War Institute, said anyone who liked a quiet game of cards or even just a little light wrestling would be well suited to army life.

He said: “War is a great cure for a bit of mild depression, in fact in 1916 if you went to the doctors complaining of the vapours he would have sent you straight off to the Somme for a rest cure. That’s something we forget today.

“It is true that there are occasional casualties. All that running around, shouting 'bang' does obviously have its risks and we do see the odd sprained ankle, much like in the Scouts.

“But most of our lads are tough enough to take it, and they enjoy the communal showering immensely. None of them ever come home in a box. Why on earth would they?”

According to the Army’s latest recruitment literature World War II was a bloodless affair resolved by a fairly tense game of chess between Adolf Hitler and Sir Winston Churchill.

Some harsh words were exchanged when it appeared the Nazi dictator was staring manically at Churchill in an attempt to put him off his moves.

But both men shook hands as Churchill triumphed and the Nazis agreed to hand back Europe to its rightful owners and refrain from any further atrocities.

However, the Army’s claims are in direct contradiction of the latest research by the Alan Rowntree Foundation which claims war is a highly dangerous activity that can, in the worse case scenario, lead to participants being shot at.

According to the Foundation soldiers are often killed during conflicts, and not always by their own side.

To The People, I Present My Vision 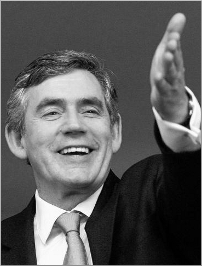 WHEN I was a small boy somewhere in Scotland, I remember meeting a poverty-stricken old man who coughed phlegm and bits all over me. Even though I was just a child, I vowed to do whatever I could to cure that man of his illness, and then destroy him.

During my time as prime minister I have often reflected on my legendary Scottish childhood and the values I inherited from my local community in Fife, or possibly the Stirling area.

And those are the values I still cherish today: An unshakeable belief in the power of News International and an unquenchable thirst for revenge.

As we move into 2008 let me assure you that I am still bursting with good ideas. I'm not going to tell you all of them, otherwise you might get very excited and take the rest of the week off. That may feel good now, but it's not going to stop the Chinese building 5000 new coal-fired power stations and invading the Moon.

This year we face many challenges, both as individuals and as unremarkable cogs in the Great Machinery of State. That is why, later this year, the Labour government will move to end this historic injustice once and for all by abolishing individuals and the fear and confusion they provoke. My plan to number everyone may well cost billions of pounds, and perhaps even a few lives, but at the end of the process everyone will at least know where they're supposed to sit.

As a young boy in Fife, or possibly Bathgate, I would ask my father, 'why are all of those people outside our house so disgusting?'. My father would tell me that it was because they lacked health. Some were unhealthy because they lived in a hole and drank paraffin, but most were unhealthy because of capitalism. I never forgot part of that story and when I entered Parliament in 1983 I made a vow: No more holes, no more paraffin. Thanks to record levels of investment many of those holes have now been filled and people are encouraged to enjoy paraffin responsibly.

But if Britain is to be a healthy society, it must, above all, be a healthy society. I have consulted with the country's leading experts and they have told me that the one thing  this will require, above all else, is a good deal more health. That is why, from today, I am giving new powers to doctors so that they can tell people to stop being unhealthy. Over the next two years, the NHS will refuse to treat more than two million people and will instead send them home with a leaflet about fruit.

Not only do I think Britain is ready for fruit-based leaflets, but I believe that 2008 will be remembered as the year the great British people finally got over their petty obsession with house prices and paying bills and rediscovered the immense pride in having a prime minister who is now one of the best in Europe at dealing with chicken diseases.

But above all I believe, and strongly suspect, that 2008 will be remembered as the year David Cameron suffered a tragic and perfectly straightforward accident when he was alone in a field somewhere.

Happy new year and never forget that I'm the prime minister, not you.