TRADITIONAL lightbulbs are a healthy and nutritious superfood rich in riboflavin and better for you than broccoli, the traditional light bulb industry revealed last night.

According to independent research, so-called environmentally friendly light bulbs are the biggest cause of scurvy, gingivitis and the AIDS.

But eating just one traditional light bulb in the morning and another before bed will guard against all known diseases and ensure a rich and fulfilling sex life for men and women well into their nineties.

She said: “Our research shows that people who use low energy bulbs are retarded weaklings who turn up for work late with their cardigan buttons done up wrong.

“They are always the first to be chosen for the sack and have no sexual relations in the workplace because they have dandruff and underarms that smell of cabbage.

“Traditional light bulb people are natural leaders who tend to run giant companies making really useful stuff, like light bulbs which actually light up when you turn them on.

“They produce perfect stools every morning, without any straining, and can keep going for hours in bed, if you want them to.”

Ms Hollis said the finding were based on a telephone survey of ten people, none of whom had spent their lives building a traditional light bulb company only to see it destroyed by communists and gays. 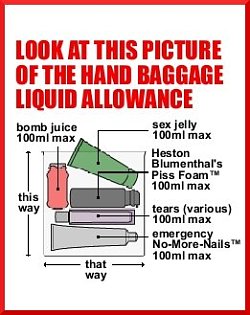 AIRLINES are to lift the ban on KY and other proprietary sex lubricants, under new security regulations introduced today.

Under the simplified regime passengers will also be allowed to take two bags into the cabin at all airports except the ones where they can't.

Meanwhile the limit on the number of beards who can travel together has been increased from two to four.

Tom Logan, spokesman for the British Airports Authority, said: "These new rules are so simple and straightforward that anyone who can't remember them must be a terrorist.

"People flying from Heathrow can take two bags, but if they land with both of them at any other airport they will be pinned down and shot in the face."

EasyJet is allowing two bags, but the extra bag will be thrown out in mid-air and collected, hopefully, by an old bus somewhere along the route.

Logan added: "The bus will then deliver all those bags that are still remotely intact, although we do expect delays of up to 12 hours."

Ryanair will accept two pieces of hand luggage, but passengers will have to allow chief executive Michael O'Leary to punch them in the face.

Mr Logan said that bearded, olive-skinned men who jibber-jabber in a threatening manner had nothing to fear from the new regulations.

"As long as they don't mind having big Andy in them, right up to the elbow," he added. "And this year he has promised to take off his watch."