How much should you be paid? A gammon decides

WITH the biggest rail strike for 30 years underway, what should train drivers be paid? 58-year-old Roy Hobbs of Swindon, who knows f**k all, decides:

Train drivers. How can they justify £54k a year when trains don’t even need steering? A round £10k’s fair. Once they’ve got it running they can sell refreshments on commission rather than watching Netflix in the bloody cab.

Police marksmen. Take out terrorist gunmen clean as you like, but how many do they shoot per year? One? Two? That’s like having 363 days off, so according to the average police salary they should be paid £172.60 per annum. If they want to earn more they’ll have to shoot more.

Zookeepers. Meant to see visitors are entertained, but I went to the zoo and I was bored shitless. Shouldn’t be paid more than seven grand unless they get in an enclosure, rile up the beasts and give us the lion-versus-gorilla battle to the death we all want to see.

Bin men. Carrying metal bins was a proper man’s job, but with wheelie bins it’s piss-easy. At most they should earn £9,000, or twice that if we remove the wheels from the bins. That’s better value from our council tax.

Nurses. Britain overvalues its nurses, who are just women who are too thick to be doctors. Handing out a few pills that hardly weigh anything isn’t exactly hard graft, so their pay should be reduced to around £5k a year. They get all their food free at food banks anyway. Nice work if you can get it.

Office workers. Homeworking cowards wrecking the economy by not buying a sandwich and a tabloid newspaper, as the owners of tabloids rightly pointed out. A Daily Mail and £65 every lunchtime at Pret a Manger is mandatory. It’s the only way to make the economy productive again.Pay £3,000.

Rock stars. They all earn too much. There’s balding blokes in sheds could write classic hits for a sensible salary, say £16k, and none of that sex and drugs nonsense. I taught myself Wild Thing in less than a week, so I don’t see what all the fuss is about Jimi Hendrix.

Clowns. The clown I booked for my daughter’s birthday party magically produced a coin from his ear, but was he terrifying? Was he f**k. Stephen King’s Pennywise has set the benchmark so don’t pay more than £5 an hour unless they rip a child’s arm off or turn into a giant spider. And no tip.

Britain runs aground after single day with Raab in charge 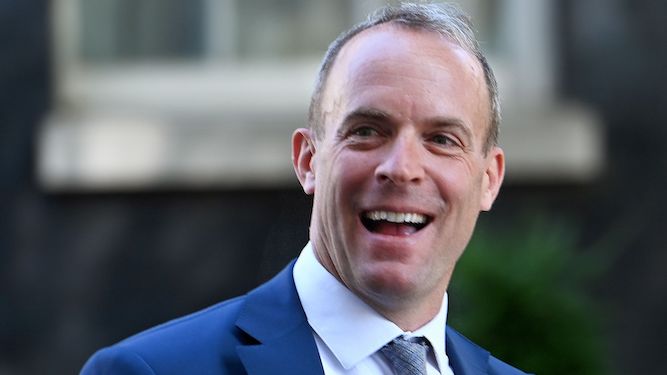 THE UK has gone off course, run aground on the coast of France and is taking on water after a single day with Dominic Raab at the helm.

While Boris Johnson recovers from a septum piercing and tongue forking done on the NHS, the deputy prime minister has run Britain into the rocks, meaning we now share a land border with Belgium and Norfolk is gone.

A Downing Street source said: “He said he’d just had a go at turning the wheel of the old ship of state but he was pretty sure he’d put it back where he started. Then CRASH.

“Somehow he’s steered us so Great Yarmouth has rammed into Bruges, the Wash has flooded, we’ve got migrant boarders pouring in and we can’t get free without leaving France attached to with Kent. And that’s solidly Tory.

“We’re now contiguous with Belgium, which is very much not covered in the Withdrawal Agreement, and our historic coastline’s suffered £60 billion of damage. It could be the UK’s not repairable and has to be sawn up for scrap.

“Raab’s denying all knowledge, saying it was the EU’s responsibility to close the sea. What a perfectly useless dickhead.”