YOU’RE working a white-collar office job so you’re middle class, but are you the most middle-class person in your office?

Here’s how to come top at being middle:

Run a library of fruit teas – Builders drink ordinary tea. Try-hards keep a box of Earl Grey on the desk. But keeping a selection of fruit teas which you push on everyone, all of which smell quite nice but taste exactly the same, really affirms your commitment to a certain narrow superiority.

Affect not to know what car you drive – Announcement that a black Skoda in the car park needs to be moved? Look panicked and say, “Is that mine? I don’t know anything about cars,” until Martin in procurement wearily reminds you, again, that you drive a massive Volvo SUV.

Take absences to attend your children’s concerts – Whether it’s arriving late, disappearing early or vanishing for half the day, make sure to explain it’s to attend one of your children’s piano, viola, or bassoon performances. “I don’t know where he/she gets it from!” implies that it’s you.

Mention your wet room – Someone having work done on their house? That’s the perfect opportunity to once again recount the saga of the leak in your wet room, with the emphasis on wet room. Any chance to drop in the underfloor heating shouldn’t be missed.

Keep shoes under your desk – Nothing says ‘not rich, but comfortable’ like six to eight pairs of shoes permanently under the desk, like a tiny dark branch of Office. Change them for meetings as if it matters.

Drop frequent hints that your marriage is sexless – Aggressive flirtation with younger staff members, occasional toilet weeping or over-zealous attention to who’s driving who to the AGM will let everyone know your gilded marriage contains no expressions of physical love whatsoever. Because ultimately, sex is common.

M&S coat hanger 'appalled' at being used to unblock toilet 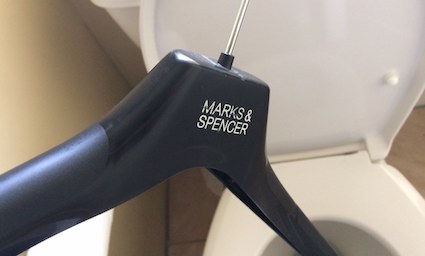 A COAT hanger from Marks & Spencer is distraught after it was used to unblock a toilet.

The hanger, normally used for a fully-lined tweed jacket, confirmed she was ‘utterly outraged’ by the incident.

The hanger, Anna Thomson, said: “I had heard of this kind of thing going on but I never thought it would happen to me.

“I can understand using a TK Maxx hanger as a lavatory unblocking device, but I am from one of Britain’s best-loved premium stores.

“I have nestled among silk shirts and tailored suits. A hanger of my calibre should not be used to mangle a massive shit. I will never be clean.”

Thomson added: “I’m sure the creature who blocked the toilet was very grateful, but I do not feel in any way heroic. I may as well have been used to hang a football jersey.”