At Home With Boy George

HE is one of the biggest stars of his generation, known for his acid wit and his flamboyant sense of style. Boy George – icon, artist, enigma – gives the Daily Mash a privileged peek inside his luxurious London home… George after another successful chocolate evening

George greets us dressed in a silk kimono. His make-up is freshly applied and he sips from a cup of sage and jasmine tea. He is gracious and warm as he guides us through his exquisitely appointed hallway. We are intruiged by the intricate leatherwork that adorns the walls and the masterful watercolours which express George's passion for ancient Greek heroes having acrobatic sexual intercourse.

As we move into the drawing room, a mixture of 1930s Coco Chanel Paris with a smattering of Bo-Ho chic, we notice the beautiful, tiny mirrors placed on the coffee table and the lingering scent of what can only be described as Grade 'A' skunk.

George sinks into a sumptuous, pink leather armchair that, in just the right light, looks remarkably like a giant scrotum.

He talks excitedly about his triumphant return to London and his fascinating new projects, before throwing a custard cream to the 16 year-old Moroccan boy chained to the radiator. Hassan glances up with a look that says, 'phone the police immediately'. He has the aroma of freshly pressed olive oil.

George's kitchen is sleek and efficient. Naked dwarves are preparing a brunch of roasted butternut squash and blanched spinach. In the corner a 16 year-old Morrocan boy is peeling garlic while chained to a radiator. The stainless steel worktops are spotless and dazzling.

George's inner sanctum, his boudoir – his bedroom – is a riot of colour. We sense that the theme is male genitalia. The bed seems narrow until it expands into two symetrical round sections at the top. "It looks like a great big cock," we say to George and he smiles and nods.

Negotiating our way around the 16 year-old Morrocan boy who is strapped to the bedroom door, we move back into the hallway and our brief but scintillating odyssey through the life of George is complete.

He thanks us graciously as we pass back into the Georgeless streets and with a final wave he seems to say, 'give me an hour before you contact the authorities'.

He is, simply, George. A national treasure. 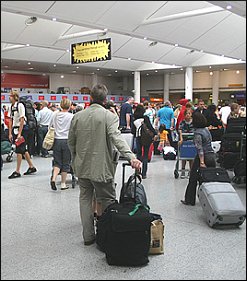 AIRLINES have been accused of misleading the public after claiming short-haul flights would not be full to the brim with fat, slow, noisy bastards. The Gathering of the Fucknuts at Gatwick

According to a report by the European Commission, airline websites failed to inform consumers that their travelling experience would be as enjoyable as falling face first into a big, stinking pile of shit.

The report found that the airlines did not tell customers that 'speedy-boarding' was a 'complete lie' and that passengers would 'crowd around the gate like a herd of fucknut sheep regardless of the letter on their boarding pass'.

They also failed to tell passengers that the advertised flght time did not include the mandatory 45 minutes on the tarmac because 'some twat put the wrong fucking bags on the wrong fucking plane' and that Gatwick Airport is the 'single worst fucking place in the whole fucking world'.

The report also found that no matter where your flight was to, there was always one Middle Eastern looking passenger on board, which meant you were 'shitting your pants for the entire journey while at the same time feeling very bad about it'.

"It could be a flight from Inverness to Exeter but there's always a guy who looks like he's just arrived from Riyadh," said one regular flyer.

"I'm sure he's a perfectly nice chap, but would it be too much hassle for him to go up and down the aisle telling everyone, 'it's okay, I'm not going to kill you'?"

The airline industry insisted it had made huge improvements including a reduction in the number of boarding pass checks to 452,943 and slashing the price of a small tub of Pringles to £12.50.