LAST week many were unaware that the earth was narrowly missed by a sizeable asteroid.

Usually, when people find out there is a massive object hurtling towards them through space, they panic at the terrible inevitability of it all. But all they need to is remember the similar feelings they get when observing the trajectory of ice dancing mother-of-three, Kerry Katona.

The problem with asteroids and Ms Katona is that both can be elusive. Neither gives off its own light so if they’re not drawing attention to themselves by obscuring space, drooling onto Philip Schofield or snoozing while their mother commits sodomy with their fiancé in the same room, they just blend in with the background.

If Ms Katona is heading for a direct impact, we won’t know until she’s slamming into us from out of nowhere at 40,000mph- a fact both the dinosaurs and the managing director of Iceland know only too well. So what can be done?

If we were in Hollywood and a monstrous hunk of featureless space dross was barrelling towards us at breakneck speed, we’d deal with her the American way and launch a nuclear weapon straight into her face. But the outcome may not be as satisfying as you’d think – it would depend on Ms Katona’s consistency on the day, whether it is solid iron like a branflake or icy dirt and frozen carbon monoxide like her favourite 75 piece Indian platter.  Furthermore, the weapon may pass right through her gravelly interior without really registering.

There are other, more humane ways to deal with the threat. Any self respecting asteroid or bipolar jungle celebrity knows that the best thing to do if you’re heading for a collision is employ a specialised team of robotic helpers to get you on a different track. For Katona and asteroids alike, size is always going to be an issue and shedding pounds is a sure way to avoid a catastrophic crash. But which method to choose? One way would be to have her robots follow her around, holding up huge mirrors. Powerful solar rays would fire into her eyes, causing her to vomit out unwanted materials.  The resulting weight loss would subtly alter her course and we’d all breathe a sigh of relief.

While for many years now it has not been advisable for celebrities to black up, it could well be the only solution for both Ms Katona and earthbound asteroids. An intrepid team would paint the face, midriff, labial regions and other parts normally exposed to the sun, causing increased heat absorption on one side of her body and thus steering her from doom once again. The asteroid would be home and dry after this stunt, but Ms Katona would be well advised to call up her old friend Max Clifford to deal with the inevitable fallout from justifiably outraged minority groups. 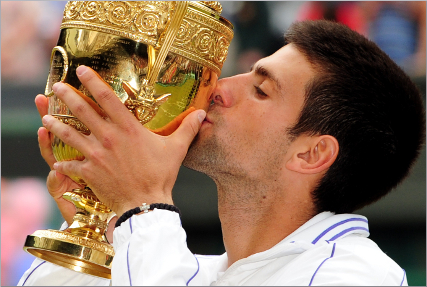 British number one now needs Federer, Nadal and Djokovic to be wiped out in freak barley water accident.