PEOPLE are terrified of nuclear reactors again. As always this is based on ignorance, but in reality we have nothing to fear. And that’s because reactors are a lot like Duran Duran.

The workers at Fukushima are having an awful time with their radioactive chemicals. My ‘O’ level chemistry teacher was a brilliant man who inspired many a young buck in his day, but present him with an overhead projector and he became a senile old fool. That’s the problem with nuclear fission: professors can lecture you silly about iodine but if you try to get one to operate the Sky Plus remote, they become orang-utans who’ve been given a gram of ketamine and instructed to send a text message.

Back in the 1980s, I could almost have been a member of Duran, with my frequent trips to the Far East and the real love I felt for Jane Fonda. It was around this time I was lucky enough to visit one of the earliest nuclear fusion reactors. Before it had been finished, I put my ear to one end and asked my friend Dr Bussard to sing Save a Prayer down it. I don’t know what it was about that vacuum chamber but he sounded magical – like the real thing. I knew then that fusion was special and fission was yesterday’s news.

As a fission reactor, Fukushima is like Simon Le Bon. He’s been forcing himself upon us for decades and brings with him all manner of suspicious sounding items such as uranium. All this time, we thought it was best for us. But then we thought about nuclear fusion and saw it was just like Nick Rhodes. It’s a much more appealing alternative: safer yet fancier – and no dye in its beard. Nuclear fusion doesn’t need Le Bon’s hazardous baggage.  All it needs is deuterium.

And what’s deuterium? Well, if you’ve ever scoffed ‘stupid dirty sea! I can’t drink you! You claimed Shelley Winters and cover birds in crude oil’ then you’ll be pleased to hear that the sea is full of useful deuterium.  Aside from making Dr Bussard sound stupendous; the fusion reactor also fuses deuterium to release power.

So if you thought you could get along without Nick Rhodes just like you could without the sea, think again. There could even be a future for him in nuclear physics. I know a certain fusion-loving professor from Manchester whose eminent career began when he too tinkled his ivories and wowed audiences with beguiling haircuts. I’m sure he’d provide some gentle coaching to Rhodes, should he ever question his career move.  I know he was a rock for Professor Brian May.

Imagining Duran Duran without keyboards is ghastly enough. If we don’t embrace nuclear fusion, we’ll soon be listening to them without electricity and then we’ll see who’s dancing in the sand? 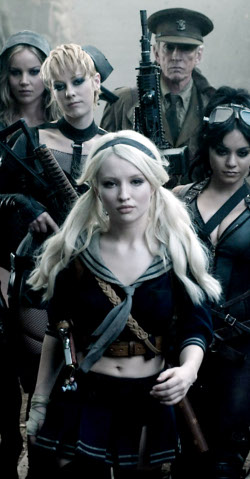 ACTION-fantasy tripe bucket Sucker Punch has made idiots feel cleverer than something.

The film, directed by Zach Snyder and starring tight young women, is based on a 12-year-old boy’s drawing of a woman with massive breasts fighting a samurai robot.

Julian Cook, professor of cinema at Reading University, said it was a breakthrough for studios who have spent years trying to give morons the exhilarating feeling that they have been underestimated.

He added: “Your average moviegoer really just wants to feel disdainful of something. It’s that thrill of superiority that people who struggle to operate belt buckles rarely enjoy.

“But it’s a big ask to make someone feel clever when they’ve just paid £12 for a tray of lukewarm crisps draped in a luminous cheese-equivalent.

“Flubber nearly succeeded, likewise Meet The Spartans and any live action film about cavemen. But with Sucker Punch, they have finally hit paydirt. It’s like a film and a computer game at the same time, but not in a good way.

“Meanwhile the women look like they’ve been dressed by Victorian paedophiles, giving the cretins that extra ‘moral high ground’ buzz.”

Following the success of Sucker Punch, Snyder has now been given the greenlight for his Robocop re-imagining Fartcop With Boobs.

Father-of-one Tom Logan said: “I am a moron. Sometimes I won’t get in the bath because I see my own reflection in the water and assume there’s already someone in there.

“And, also, I felt that some of the fart jokes in Big Momma’s House were too complicated.

“But watching Sucker Punch made me feel like Stephen Fry having to make small talk with builders.

“I feel as tall as a cloud. Clouds are tall, right?”